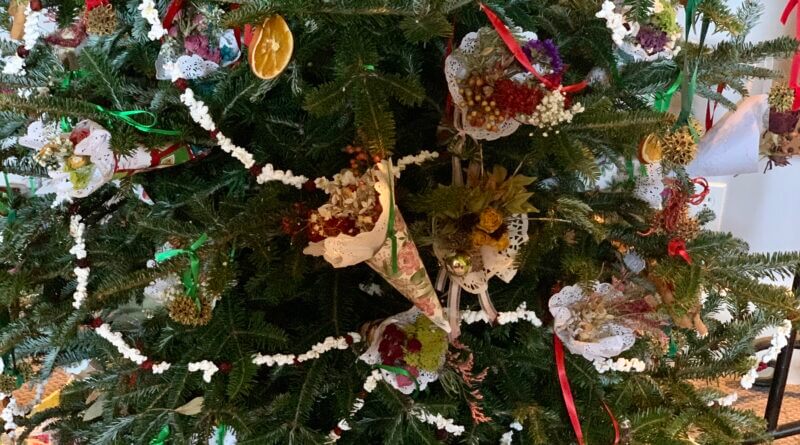 One of the programs selected by the planning committee of the DeSoto Civic Garden Club for the 2021-2022 calendar year was, “Have an Old Fashioned Christmas.”

The decision was made by this committee to schedule the program for December and incorporate decorations that had a botanical arts theme which would be used to decorate a live tree for the DeSoto County Museum in Hernando.

After much research, it was decided to embellish the live tree with dried plant material and use it as a focal point at the meeting. Various forms of dried plant material would be used by all club members in making tussie-mussies, with the addition of the following ornaments: cinnamon sticks with decorative ribbon, sweet gum balls, dried orange slices, and long strands of popcorn with cranberries to wrap around the tree.

The purpose of “Have an Old Fashioned Christmas,” as it pertains to the decorations used in the 19th century was for those ornaments on the tree to be more indicative of what might have been before electric lights and tinsel.

With the completion of those plans, the December meeting of the DeSoto Civic Garden Club was underway.  In addition to the garden club’s activity of decorating the Christmas tree at the museum, Robert Long, Curator of the museum, shared additional information of how the influence of Christmas tree traditions began in medieval times as well until the present day.

The lovely Spruce tree that was donated by Lowe’s in Southaven for the museum can be viewed during the month of December, from Tuesday through Saturday from 10 a.m. to 5 p.m. Admission is free. For more information, the telephone number is 662-429-8852.