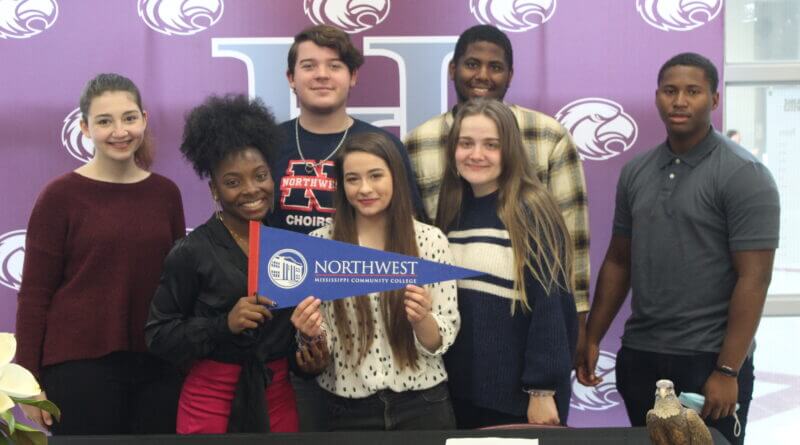 You see it all of the time in sports. Huge signing ceremonies are held with friends, families and supporters celebrating an athlete’s committing to a college with a full scholarship for an education as he or she plays their particular sport.

Back in 2017, when Horn Lake High School choral director Holly Beck discovered that her senior choral students were getting more than $200,000 in scholarship money, she decided to hold a signing ceremony for her youngsters, much like the athletes did.

It has become an annual event for the Horn Lake choral program and this year, seven students took their moment at the table and signed their scholarship offer.

This year, the seven students signing their scholarships are all going to Northwest Mississippi Community College, where former Hernando Middle School choral director J. Reese Norris is now the director.

Norris said it is not unusual for a group of students to all go on to the same college for choir.

“The choral world is more than just a class and more than physical successes,” Norris explained. “The students feel like a family. It doesn’t surprise me that when one decides to go, others will follow because they want to sing together.”

“Most of them won’t have to pay a penny for the first two years of college education,” Beck said.

Norris calls Beck a pioneer for conceiving the signing event for choir.

“I think it’s fabulous that she provides this opportunity for her students,” Norris said. “This sort of event has been a mainstay in the athletic world over the years.”

And Beck said it was important for her students to be recognized for the work they have put in over the past four years, some even as long as seven years when their middle school experience is included.

The seven students who participated in the signing ceremony are: