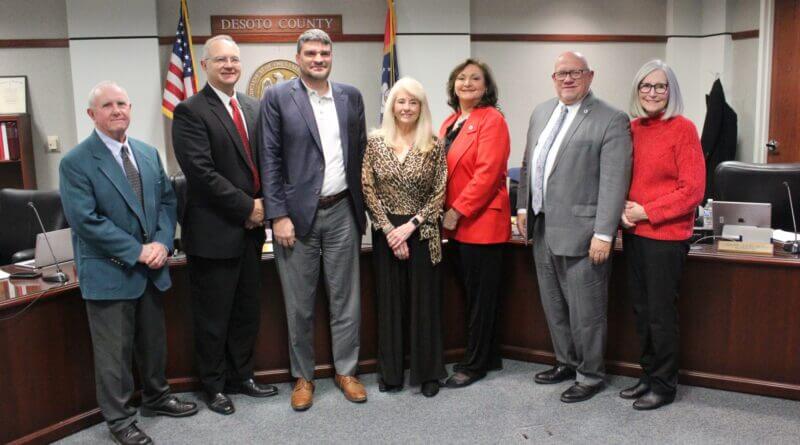 Photo: Election Commissioners Barbara Chatham and Chad Engelke are joined by the Board of Supervisors and Circuit Court Clerk Dale K. Thompson. Chatham and Engelke were appointed to fill vacancies and each won election in November. (Bob Bakken/DeSoto County News)

Supervisor Michael Lee Monday was named to be the DeSoto County Board of Supervisors Board President for the coming year.

Lee replaces Mark Gardner, who has been Board President for the past year. It is the second time Lee has served as Board President, in charge of a number of responsibilities, such as running each board meeting, signing documents on behalf of the board, and other items.

Supervisor Ray Denison was chosen to be Vice President for the year.

“I want to thank Supervisor Gardner for his hard work as President during 2021,” Lee said. “I pledge to be diligent and serve the people of DeSoto County with honor.”

Lee has been on the Board of Supervisors since 2014, when he was named to fill the term of his late brother Harvey Lee, who died while in office. Michael Lee was then elected to the position in the 2015 election and has been in office since.

Lee has also announced his interest in running for Sheriff when the term of current Sheriff Bill Rasco ends in 2023, as Rasco has said he is not running for re-election.

While board members must go through the process of nomination and an official vote, it has been common knowledge over the years that the role of Board President is rotated among the board members each year, which was continued on Monday.

The beginning moments of the first board meeting in 2022 also had the official swearing-in of Election Commissioners Chad Engelke and Barbara Chatham.

Engelke was named Election Commissioner last August when Cara Combs resigned to focus more on her career.  Chatham was named in January to fill the post of her late husband Barry Chatham. Both were elected to full terms in November’s general election.

There was discussion during the first part of the board meeting about the redistricting process in the county for future elections. As the state Legislature is tasked with setting state and congressional districts, the county is in charge of setting the supervisor districts.

Pam McKelvy Hamner, representing a DeSoto County Redistricting Committee primarily made up of African-American county residents, asked how her group can submit a redistricting map for consideration and a timeline about when the map must be submitted.

The group has been concerned about the lack of Black representation in districts’ makeup and wants to be more involved in the process of drawing district lines.

Hamner was concerned that her group was not made aware ahead of time that on Dec. 13, board members approved, as part of its new business agenda, the hiring of Bridge and Watson of Oxford as the consultant it would use to help determine the district lines for the next 10 years. Bridge and Watson consulted the county in the last redistricting.

Hamner said her group did not know the contract with the county was being brought up for approval in December, although the item was posted as part of the board’s agenda ahead of the date.

“The federal guidelines are what we follow,” County Administrator Vanessa Lynchard told Hamner about how the district lines will be drawn. “We’ll be more than happy to get you a copy of that.”

Board President Michael Lee defended the process that has been done thus far, refuting any belief from Hamner’s group that the board has not been transparent and Supervisor Mark Gardner told Hamner the agenda items are always posted on the official county website by the Friday afternoon ahead of the meeting date.