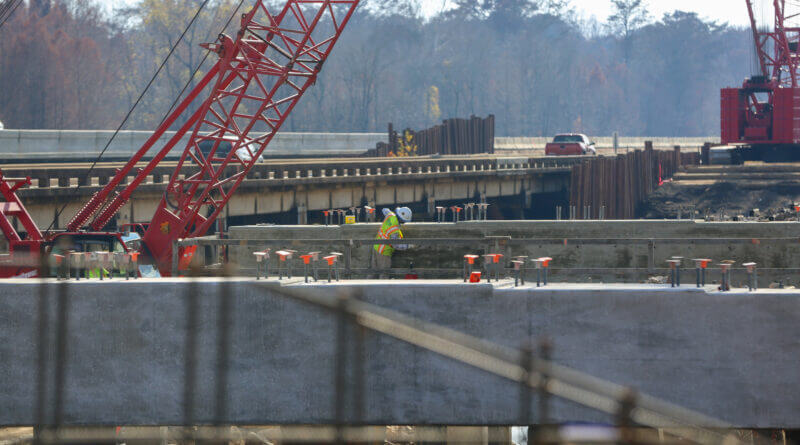 “As the WORK AHEAD signs and orange barrels go up and down, motorists should start experiencing the benefit of these important projects,” said Caldwell. “Please slow down and be mindful of our workers and contractors. From the smallest repairs to the largest construction project, we are steadily working to make things better.”

Bridge replacements on State Route 3 in Tate and Tunica Counties

Work is progressing on two bridge replacements on State Route 3 in Tate and Tunica Counties.The bridges are being built over the CNIC Railroad, and the Coldwater River near the town of Savage.The bridges are being built on a new alignment, adjacent to the existing road. The existing bridge over the CNIC Railroad was closed in early December due to safety concerns, and is being demolished. Traffic is being routed around that bridge. The contractor is planning to install a temporary bridge while the permanent bridges are being built. Test piles have been driven at bents 2 and 3 at the bridge over the railroad. Dirt work has begun on the west side of Coldwater River at the beginning of the project, as well as on the east side of the creek between the river and railroad tracks. The $25.5 million dollar project was awarded to Talbot Brothers Inc. out of Nesbit.  It is scheduled to be completed in the spring of 2024.

Talbot Brothers Inc. recently completed major construction on a $1.7 million dollar roundabout at the intersection of State Route 7 and State Route 9w in Lafayette County. The roundabout to traffic on December 9th. Remaining work includes installing the lighting foundations, striping and completing dirt and shoulder work. The new roundabout will now provide a continuous flow for traffic, and a safer intersection where SR 7 and SR 9w meet.

Talbot Brothers, Inc. has been awarded a $6.7 million dollar contract to construct a bridge replacement over Long Creek In Panola County. It is being built on a new alignment next to State Route 51. Traffic will remain on the old alignment while the new construction is underway. The contractor has completed driving piles and pouring caps and has begun setting beams as they arrive. They have completed a large portion of the dirt work on the new alignment, but plan to temporarily grass everything due to the onset of winter. This project is scheduled to be completed in the winter of 2022.

Talbot Brothers, Inc. has been awarded a $5.2 million dollar contract to build a bridge replacement on State Route 4 in Marshall County. The bridge is over the BNSF Railway and The Mississippi Central Railway. The old bridge structure has been torn down.  Contractors are now driving pilings and doing substructure work for the new span. Span beams have been set and one of the span decks has been poured.  Half of the east slope paving has been poured.  East bent pile driving began in November on the eastern bent.