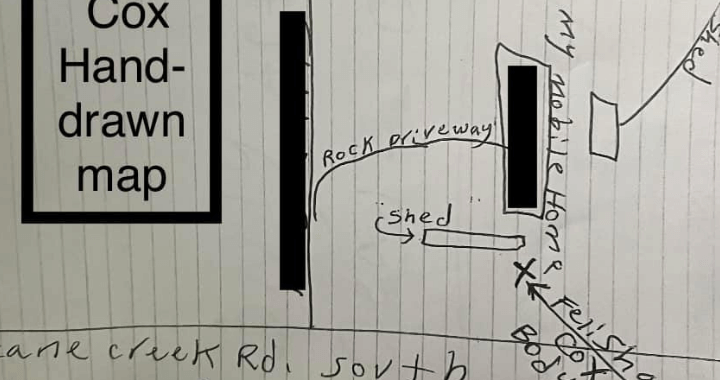 Executed killer David Cox made a hand drawn letter to show the location of the body of Felecia Cox, another victim of his missing since 2007.

The body was presumed to be recently found at the location of his former residence.

It had been speculated that recently executed murderer David Cox had wrote a letter about the unsolved dissapearance.

The District Attorney released the following:

PONTOTOC, MS – Since late Summer, the District Attorney’s Office has been engaged in communication with the Mississippi Office of Capital Post-Conviction Counsel (CPCC) regarding the possibility of a disclosure by one of their clients, David Neal Cox (Cox), of the whereabouts of the body of Felicia Cox. Cox has been a suspect in the missing person case of Felicia Cox since her disappearance in July of 2007.

Pursuant to Cox’s request, he was granted immunity with respect to the Felicia Cox disappearance in exchange for the location of Felicia Cox’s body.

Cox was executed on November 17th, 2021 by the State of Mississippi pursuant to a 2012 Union County capital murder conviction involving the death of his estranged wife in 2010.

A few days prior to Cox’s execution, Assistant District Attorney Paul Gault was notified by CPCC counsel Humphreys McGee that within days after Cox’s execution, a credible source would come forward with information regarding the location of Felicia Cox’s body.

McGee, Weddle, Gault, and Wise met around 2:30PM on November 19th, 2021, at which time McGee shared a letter from Cox instructing his attorneys regarding the timeliness of the disclosure accompanied by a hand-drawn map by Cox Marking the location (attached with redactions).

Weddle drove McGee, Gault, and Wise to the location on Cane Creek Road in Pontotoc County to view the property from the public road.

After the viewing, Bob Poe, a former deputy with the Pontotoc County Sheriff’s Department, was contacted by our office to arrange a phone call with Amber Miskelly, the daughter of Felicia Cox. Miskelly was informed at that time that the District Attorney’s Office had obtained information about Felicia and that we would be attempting to verify the information in the coming days. CPCC attorney Treasure Tyson also provided valuable information pursuant to Cox’s waiver.

Satellite imagery was used to make comparisons between the property in 2007 and currently. (Attached)

On Monday, November 22, our office met with Sheriff Leo Mask, Chief Investigator Jimmy Whitehead, Investigator Tim Matthews, and former Pontotoc County Investigator Bob Poe, to discuss Cox’s disclosure and plans for recovery of the body. Logistics of the search for Felicia Cox’s body were planned with the assistance of Mississippi State University Departments of Archaeology and Anthropology. It was decided that ground-penetrating radar (GPR) would be used by MSU personnel to assist in the recovery. The assistance of cadaver dogs from Golden Triangle K9 out of Columbus, Mississippi was also added to the efforts.

On Sunday, December 12, 2021, search efforts began just before 9AM. The presumed remains of Felicia Cox were located at approximately 1:20PM. Amber Miskelly and other family members were present on site and were able to view the recovery after the location was secured. Mississippi State personnel excavated the remains and turned possession over to Pontotoc County Coroner Kim Bedford.

The remains have been transported to the Mississippi Medical Examiner’s office where an autopsy will be performed and DNA material extracted for analysis in the coming days to confirm the identity of the remains. Imagery from the GPR data (attached) also showed an anomaly similar to the body location. However, after additional digging in the area today, the anomaly was determined to be a grouping of tree roots.