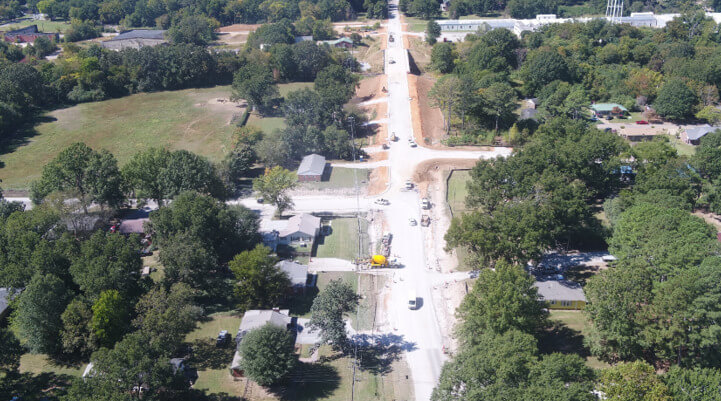 “There’s no shortage of needs in Northwest Mississippi. Keeping these and other projects on track will improve our overall transportation network,” said Northern District Transportation Commissioner John Caldwell. “Hopefully, these and others will prove to be a sign of more to follow.”

A $3.9 million paving project is set to start in November in Grenada County. The lottery funded project includes the mill and overlay of five miles of State Route 8 from State Route 7 in Holcolm to the beginning of the five-lane section in Grenada. The project was awarded to Lehman-Roberts Company of Memphis and will be completed by summer 2023.

A $6.1 million paving project is nearing completion in Marshall County. The 16 mile paving project includes the mill and overlay of State Route 309 from State Route 4 to U.S. Highway 78. All mainline paving is complete. Final pavement markings and permanent signs are being installed. The project was awarded to Lehman-Roberts Company and is expected to be completed by fall 2022.

Work is now underway on a $5.6 million paving project in Lafayette County. Eleven miles of State Route 334 from University Avenue to 1.04 miles east of County Road 418 are being resurfaced. This project was awarded to Lehman-Roberts Company and will be completed summer 2023.

A $52.5 million project to replace four bridges on Interstate 55 at Hickahala Creek continues in Tate County. The project includes construction of new northbound and southbound bridges over Hickahala Creek and the Hickahala relief area.

The project was awarded to W.G. Yates & Son Construction Company of Jackson. This project is set to be completed in fall 2022.

Bridge replacements on State Route 3 in Tate and Tunica Counties

All spans are hung over the railroad bridge. Crews are preparing to pour caps and end walls at bents 1 and 4 on the bridge over Coldwater River. Haunch girders are expected to arrive on site in November. Earthwork operations are nearing completion.

The $25.5 million project was awarded to Talbot Brothers Inc. of Nesbit.  It is scheduled to be completed in spring 2024.

Talbot Brothers, Inc. was awarded a $7.6 million contract to construct a bridge replacement over Long Creek in Panola County. It is being built on a new alignment adjacent to State Route 51. Traffic will remain on the old alignment while the new construction is underway.

The contractor has paved the base and binder course of asphalt and finished the rails on each bridge. The guardrails will be installed in October, and traffic will be put on the new alignment by the end of the month. Remaining work includes removing the old bridges and roadway and building the new Hentz Road intersection.

This project is scheduled to be completed in winter 2022.

Talbot Brothers, Inc. was awarded the contract to construct a bridge on State Route 4 over the BNSF railway in Marshall County.

The bridge work is substantially complete except for placement of a concrete pedestrian rail. The majority of earthwork has been completed and crews are working to finish curb and storm drains. Asphalt will be installed in the coming weeks.

A project to replace a bridge on State Route 35 over the Big Sand Creek continues in Carroll County.

The bridge is being built on a new alignment. A detour road and bridge is currently being constructed and should be in place by fall 2022.  The work to replace the existing bridge will begin immediately after the detour is in place.

The $6.5 million project was awarded to Century Construction Group of Tupelo. Work is expected to be completed spring 2024.

Work is nearing completion on a bridge replacement project on State Route 35 in Attala County.

Both spans have been completed and are now open to traffic. Work will continue through the spring to establish vegetation on slopes.

The $13.8 million project was awarded to T.L. Wallace Construction, Inc. of Columbia. Work is expected to be completed in fall 2022.

Work is progressing on a bridge replacement project on State Route 404 near Duck Hill.

Key, LLC of Madison was awarded the $6.8 million contract to replace two existing bridges on the east and west side of Duck Hill in Montgomery County. The west bridge was opened to traffic in July. Work on the east bridge is nearing completion.

The project is scheduled to be completed fall of 2022.

The construction of a new bridge on U.S. 51 near Grenada is nearing completion.

The new bridge is now open to traffic. Work that remains is slope and minor shoulder work.

The $6.7 million project was awarded to Joe McGee Construction Company, Inc. of Lake. The project should be finished by fall 2022.

Progress is being made on a bridge replacement on State Route 7 in Grenada County.

The bridge is being built on a new alignment over Riverdale Creek. The work is necessary due to rapid deterioration of the existing bridge.  The new bridge will span Riverdale creek along with the Grenada Railroad.

The earthwork is approximately 65% complete, and the contractor is in the process of finishing up driving bridge pilings.  Bridge work will be ongoing through the winter months.

Key, LLC was awarded the $11.4 million contract. The project is expected to be completed summer 2023.

W.G. Yates & Sons Construction Company is making progress on a bridge replacement, box culvert replacement and realignment of State Route 6. The bridge is being built over Coldwater River and Cassidy Bayou.

Test and trial shafts for the bridge are complete. Pilings for bents 2, 3, 4, 5 and 6 have been driven. The northern half of the Cassidy Bayou change has been completed and armored with concrete mat. Phase 1 of the western box culvert has been completed. The central and eastern box culverts are progressing rapidly. Earthwork is taking place, and the SR 6 detour is scheduled for paving in early October.