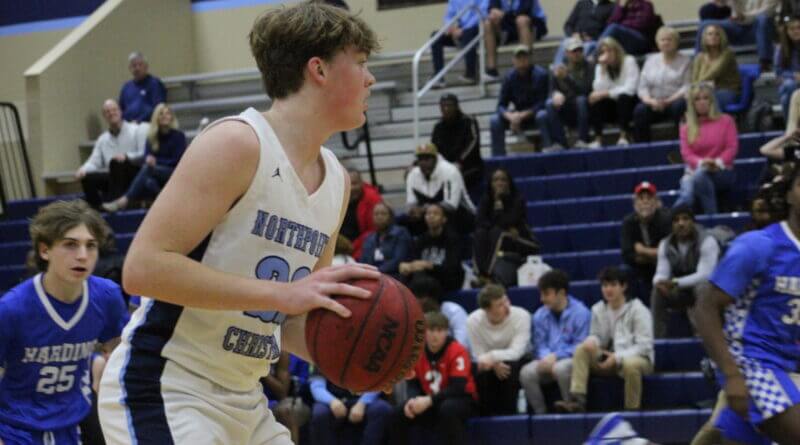 Northpoint Christian School basketball teams had a couple of closely-contested district contests with Harding Academy Tuesday night on David Manley Court. The Northpoint Lady Trojans held off Harding 45-41 in the girls game, but the Lions rallied and prevailed over the Trojans 57-53 in overtime.

Northpoint took a 13-9 first quarter lead after one quarter with Dean Patterson scoring six of the Trojans’ 13 points in the quarter. The Trojans claimed the halftime edge of five points thanks to a four-point quarter from Christian Gilliland and three-point baskets from Ayden Kelley and Jack Patterson.

Gilliland scored six of Northpoint’s eight points in the third quarter but got little help in the eight-minute session, outside of a basket from Gray Patterson. Meanwhile, Chaziah Curry’s pair of hoops for four points paced a balanced scoring attack that brought the contest even at 34-34 entering the fourth quarter.

Savion Anderson and Carter Reed each scored four points for Harding in the final eight minutes of regulation to help send the game into overtime. Northpoint answered with a seven-point quarter from Gilliland and an additional five points from Jack Patterson.

Gilliland led all scorers with 24 points and Dean Patterson scored 12 more. Harding was led by Reed’s 13 and Curry with 11 points in the victory.

NORTHPOINT CHRISTIAN GIRLS 45, HARDING ACADEMY 41: The Lady Trojans claimed another TSSAA Division II-A district victory by holding off the Lions for the four-point conquest. Lillie Milligan was the player that was the difference for Northpoint, scoring 26 of the Lady Trojans’ 45 points in the victory.  Harding was led by Makyah Malone’s 17 points.

In a low-scoring first half, Northpoint held a 16-13 lead at halftime and outscored Harding 16-11 in the third quarter for a 32-24 edge at the start of the final quarter of play.

But Harding made it close with a 17-point fourth quarter, but came up short at the final buzzer.

Milligan was nearly unstoppable for Northpoint, scoring 10 first-half points toward her 26-point performance. She added 10 more in the third quarter and hit six key free throws in the final quarter for the Lady Trojans.  Nailah Herrera was next for Northpoint with nine points in the win.

Malone sparked the second-half comeback for the Lions with 14 of her 17 points coming after intermission.

SPORTS ETC.: Quinn Thurman and Sophie Bauer of Northpoint Christian’s volleyball team this week were named to the Tennessee Sportswriters Association’s All-State Team. Thurman is a freshman and Bauer is a junior. The complete list is found on the TSWA website.