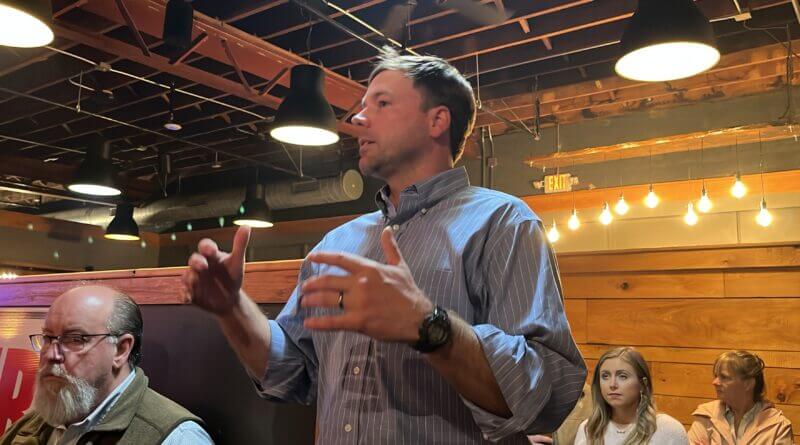 The District 5 Board of Supervisors election race in DeSoto County this year is already set to be a very competitive campaign with three candidates already qualified on the Republican side for just the August primary vote. The qualifying period continues through Feb. 1.

Former state legislator and gubernatorial candidate Robert Foster, Horn Lake City Administrator/City Clerk Jim Robinson, and John (Jack) C. Scott Jr. have all completed the requirements to be put on the Republican ballot on Aug. 8. With three candidates, it becomes likely the vote could go down to a runoff, which would occur on Aug. 29.  The seat is open with Michael Lee’s campaign for DeSoto County Sheriff.

Monday night, a Foster event to gain support and campaign funds was held in Hernando at Fratello’s Italian Steakhouse. A large gathering filled the bar area of the restaurant to show support and also hear more about the upcoming campaign from Foster.

He said the county’s infrastructure has been maintained in a responsible way and Foster said he would work on the board to continue to help grow DeSoto County responsibly.

“We want to grow it in a way that maintains the atmosphere and safety,” Foster said. “We don’t want a situation where we grow too fast with too much commercialization or industrialization, especially in our residential areas and places that would ruin that family atmosphere and that community we seek.”

Foster said that government, while not a business, should be looked at and treated as a business in as many ways as possible.

“The years that I have running a small business bring to the Board (of Supervisors) would be a good benefit,” Foster said. “There are others on the board that have run businesses so I think we would work together in thinking there.”

Foster is the owner of the popular agri-tourism attraction Cedar Hill Farm south of Hernando. He also stressed keeping a rainy day fund to cover the “lean” times or recessionary periods so as not to overspend and be forced to ask for tax increases. Millage rates in DeSoto County have remained the same since Fiscal Year 2005.

“We need to make sure we don’t overextend us financially so that when we get into lean times and tax revenues are not as high as we’d like them to be, we then have to go back to the taxpayers and say ‘we messed up, now we need to raise your taxes..”