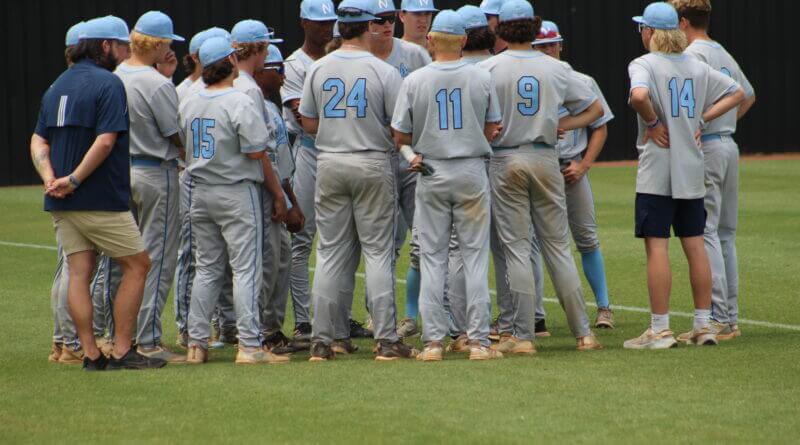 The clock struck midnight on the Northpoint Christian School baseball season on Friday and it came one game short of the school’s second state championship.

The time was actually more like shortly after 6 p.m. when it ended, but for the Trojans, who had battled so hard and gone so far through the TSSAA Division II-A playoffs, it had to feel like the midnight bell was tolling at the end of a winner-take-all 12-1, five-inning defeat to new state champion Goodpasture Christian School of Madison, Tenn.

The sour taste of defeat came just after the Trojans had pinned the first loss of the tournament, and fifth of the entire season, on the Cougars to force the championship finale at Middle Tennessee Christian School in Murfreesboro, Tenn.

The year is pretty impressive in the overall analysis for Northpoint, which finished 30-11, had won back-to-back district championships, posted three consecutive victories in one day (including a doubleheader sweep of Evangelical Christian School, which beat the Trojans earlier in the tournament) to win the West Region title, then swept Clarksville Academy in a best two-out-of-three series, to advance to the state Final Four.

“These guys have had a belief in themselves that they were a good team and that’s allowed them bounce back from bad losses and some adversity,” said Northpoint coach Stephen Kirkpatrick. “It’s all about how you handle the adversity in baseball and the guys have done an amazing job this year of handling that adversity.”

After an opening round 6-2 loss to Grace Christian Academy-Franklin on Tuesday, Northpoint went through a Wednesday of rain delays and baseball to beat Silverdale Baptist Academy and then come back to eliminate Grace Christian to get to the final round. However, rain pushed the final series from its scheduled Thursday play to Friday.

Here’s a recap of Friday’s final games of the tournament for Northpoint:

NORTHPOINT CHRISTIAN 7, GOODPASTURE CHRISTIAN 6: The Trojans were staked to a 6-0 lead after two innings, as the Northpoint bats jumped on Goodpasture starter Jonah Smithson for six runs on four hits in just 1.2 innings of work. Smithson, a senior, seemed rattled in his stint, especially after an early illegal pitch call went against him and the Trojans took advantage.

Jackson Garrett came in to relieve and settled the Cougars down but he eventually was tagged with the loss when Connor McKnatt singled in James Smith for a 7-3 in the top of the fourth inning.

Goodpasture, as the home team in the first game, scored once in the fourth and twice more in the sixth, but JD Ikerd entered the game with two out in the sixth inning and set the Cougars down in order from there for the 7-6 victory.

The first game was highlighted by stellar defensive plays. Jackson Thomason, in particular, made three impressive catches at the wall in center field, and Smith caught two line balls at shortstop to show why he can be an SEC-caliber player when he goes next to Ole Miss.

Jay Ferguson started the game on the mound and gave up three runs in 2.2 innings of work. Justin Hall pitched the next three and was also tagged for three runs, as well, but he would be credited with the mound victory.

Smith finished with three hits, including a double, and two runs-batted-in for Northpoint. McKnatt and Spencer Haley also drove in a pair of runs.

GOODPASTURE CHRISTIAN 12, NORTHPOINT CHRISTIAN 1 (5 INNINGS): Between pitch count rules and having to battle through the loser’s bracket, Kirkpatrick knew Friday’s championship series was going to “pitchers by committee.”

Some of the team’s top arms were not available for the final game, including JB Williams. He came within one pitch of having to come out of Wednesday’s 12-5 victory over Grace Christian that sent Northpoint to the finals.

The plan was to start with McKnatt, hand the ball to Connor Cavette after a couple of innings and see where the game would go from there.

Unfortunately, Goodpasture jumped on the Trojans’ tired arms for five runs off McKnatt, six more off Cavette, and a final one off third pitcher Sammy Chapman in the run-rule shortened contest.

Meanwhile, Northpoint could only muster three hits off winning pitcher Logan Harrell, and defensively hurt their own cause with two errors in the field.

Goodpasture immediately had a 3-0 lead in the visiting half of the first inning, followed by the Trojans getting their only run of the game in the home half when a Smith ground ball single to center scored Rob Hayes from second after Hayes stroked a one-out double.

Harrell would not allow another hit after the three he gave up in that first inning.

The championship was Goodpasture’s ninth in school history, but first since the Cougars won it in 2012. Northpoint was in its third finals appearance and came away with its second straight runner-up finish. As SBEC, the Trojans won the state title in 2009.

“Losing stinks, it really does,” Kirkpatrick said. “But if you look over the season there’s no reason to hang your head and no reason not to be proud of these guys and proud of what they’ve accomplished.”