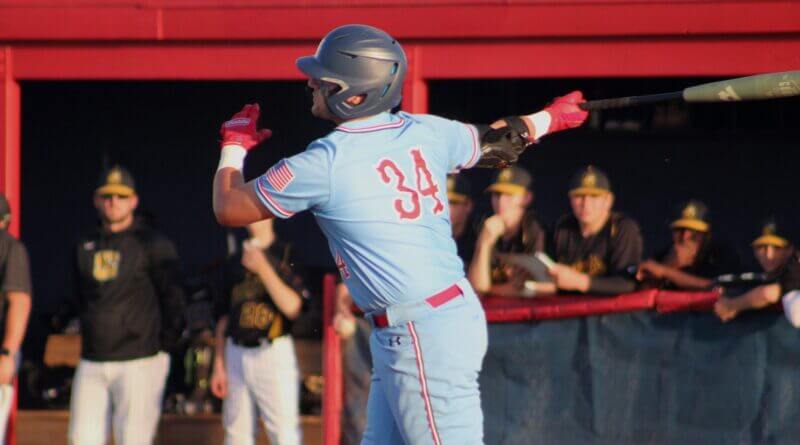 Starkville 2, Lewisburg 1: The Yellowjackets came to the ‘Burg and upset the Patriots in the first game of the second round best-of-three MHSAA 6A playoff series. Starkville had struggled past Hernando 1-0 in nine innings to reach the next round and Lewisburg had a first-round bye with winning the district regular season championship.

All of the scoring came in the fourth inning. Starkville took the lead when courtesy runner Chipper Hornburger stole third and came home on a throwing error. Later in the inning, Hayes Davis scored on a single by Mason Thurlow to give the Yellowjackets a 2-0 lead.

Lewisburg rallied in the bottom of the fourth to cut into the lead, but not enough.  Haley reached base on an error but was then thrown out at second base on the base. During the action, Carroll scored what turned out to be the only run the Patriots could muster.

Lewisburg will try to come back in the series when the teams meet in game two of the best-of-three series Friday evening in Starkville.

DeSoto Central 12, Germantown (Madison) 9: It was a slugfest between the Jaguars and Mavericks in Madison Thursday night, with DeSoto Central coming away with the win after scoring four times in the seventh to take a 12-8 lead, then stifling a Maverick rally that did see Germantown score once in the bottom of the inning, but nothing further.

DeSoto Central had a 7-1 lead in the fourth, but Germantown quickly sliced into the lead with a five-run fourth to draw within a run at 7-6.  The Mavericks scored twice more in the fifth for an 8-7 advantage, however the Jaguars tied the game at 8-8 before coming up with the four-run outburst in the seventh.

The Jaguars outhit Germantown 10-7 and each team committed three errors.  Kristian Sprawling hit a homer in the seventh inning offensive explosion for DeSoto Central, driving in a pair of runs.

Will Norris got the win in relief for DeSoto Central and Bradley Loftin earned the save.

It was the second time DeSoto Central had defeated Germantown this season, knocking off the Mavericks 11-6 in late February.  Another win in this series will send the Jaguars on to the third round. They play at DeSoto Central Friday at 7 p.m.

Center Hill 5, Neshoba Central 1: The Mustangs scored five times in the seventh inning to rally from a 1-0 Rockets’ lead and win the first game of their MHSAA 5A second round playoff series Thursday night at Philadelphia.

Neshoba Central scored their lone run in the third inning when Cade Hall scored on a single from Jacob Killens.

Center Hill’s seventh-inning rally started with a two-run single by Blake Holmes that scored Collin Clark and Rodgers. Braxton Miller reached base on an error that allowed Holmes and Scott Green to score for a 4-1 lead. The fifth run came when Logan Esfield singled to center, a base hit that plated Miller.

Neshoba Central had a runner at third with two out, but a runner was caught trying to steal second to end the game.

Esfield and Clark had two hits each to pace the Mustangs’ offense. On the mound, Clark struck out three and walked three while allowing just one run to score for the Rockets in picking up the victory.

Center Hill can close out the series and move on in the playoffs with a home victory on Friday evening.

Jackson (Tenn.) Christian 5, Northpoint Christian 1: The Lady Trojans softball team opened TSSAA Division II-A West Region tournament play dropping Thursday’s contest. Northpoint was held to four hits in the loss and committed two fielding errors. Meredith Anthony had two hits and drove in a run for the Lady Trojans, while Olivia Sowell smacked a triple in the contest.  A loser’s bracket elimination game is next for the Lady Trojans.