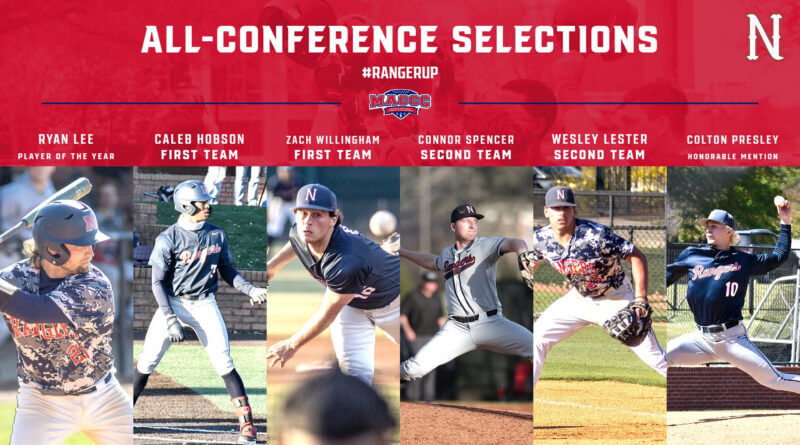 Less than a week after concluding another season that yielded the program’s 15th straight winning season and 13th consecutive postseason appearance, Northwest has garnered five All-MACCC selections, including a conference Player of the Year honoree.

Lee quickly blossomed into one of the conference’s most powerful hitters at the plate, finishing his Northwest career with a .402 batting average, 12 doubles, 16 home runs, 52 runs batted in and a .902 slugging percentage, leading the Rangers in all the aforementioned categories. The Cleveland, Tenn. native leaves Northwest ranking fourth in single-season home runs, third in slugging percentage, tied for fourth in runs scored (58), sixth in walks (35) and tied for ninth in both RBIs (52) and total bases (119).

Additionally, Lee’s skills as a catcher garnered him the Player of the Year honor, after fielding .975 with 245 putouts and six runners caught stealing.

After earning Honorable Mention All-MACCC honors last season, Hobson repeated as a first team selection this season, finishing his career with a perfect 1.000 fielding percentage after anchoring the starting role in centerfield for his entire two-year career. The Pontotoc native and UT Martin signee also ranks third in the program’s single-season record books with 33 stolen bases, while also tied for fifth in triples (4), and ninth for most runs scored in a season (55).

Hobson hit .355 at the plate this season, finishing as the team’s second-best batter. He compiled seven doubles, four triples, three home runs and 15 RBIs. One of those home runs came during the Rangers’ three-game play-in series at No. 6 Meridian earlier this month, as Northwest upset the Eagles to advance to the NJCAA Region 23 Tournament.

Willingham emerged as one of the conference’s most solid pitchers this season, finishing with a team-best 78 strikeouts and a 6-4 record in 13 appearances. His 3.17 earned run average was the lowest among the Rangers’ starting rotation and he held opponents to a .225 batting average.

Willingham’s career-defining performance came in a tight loss to Southwest Mississippi in the regular season finale on April 29. Though he received a no-decision, the Cleveland, Miss. native pitched seven scoreless innings with 12 strikeouts and just one walk allowed. The South Alabama commit also tossed nine strikeouts in back-to-back outings at Jackson State (Tenn.) and Mississippi Delta in early March.

Spencer’s only season in Senatobia proved to be a strong one. The Hernando native developed into the closer for Northwest and tallied six saves on the season, tying him with Drew Griffin (2010-11) for sixth most in program history. He made 18 relief appearances and finished with a 48-15 strikeout to walk ratio, while holding his opponents to a .134 batting average in 24.2 innings.

Spencer also compiled a 2.55 earned run average and a 2-3 career record on the mound. The Southeastern Louisiana signee collected his two wins against Lake Land College in February and again at Meridian in the Rangers’ 14-11 decisive Game 3 victory, earning MACCC Pitcher of the Week accolades for his performance.

Lester went out with a bang, both literally and figuratively, during his sophomore swan song. The Inverness, Miss. native finished 2022 with a .323 batting average, 10 doubles, 14 home runs and 54 runs batted in, good for fourth on the team in batting average and second in home runs.

One of Lester’s biggest moments came in extra innings in the Rangers’ 14-11 Game 3 win at Meridian earlier this month, as the sophomore slugger smashed a grand slam in the top of the 10th inning to help secure the upset for Northwest. He also mashed a home run during the Rangers’ season-ending loss to Jones College in the region tournament, finishing 3-for-5 at the plate in the final game of his Northwest career.

Presley also garnered Honorable Mention accolades for his efforts on the mound. The Hernando native posted a 6-2 record with 66 strikeouts in 13 starts, finishing second on the team in the strikeout category.