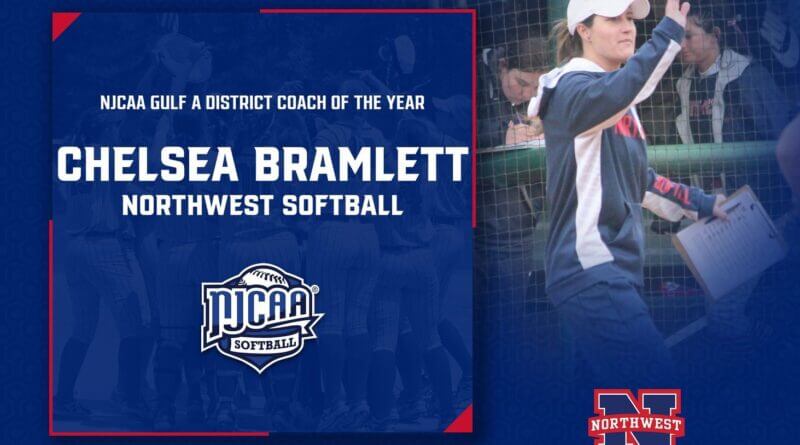 In what has already shaped up to be a historic season for the Northwest softball program, the Rangers were able to add another accolade on Monday evening as head coach Chelsea Bramlett was recognized as the NJCAA Gulf A District Coach of the Year.

Bramlett was presented with the award during the NJCAA Division II Softball Championship banquet at Talladega Superspeedway. It’s the first Coach of the Year award for Bramlett, who is in her third season leading the Rangers.

Bramlett has guided the softball program to new heights during her young tenure at Northwest. In just three seasons, she has compiled a 63-37 overall record, good for a .630 winning percentage. The Rangers enter the NJCAA Division II Softball Championship tournament with a 35-13 record, one win shy of tying a single-season record of 36 victories, which was set back in 2007.

Against MACCC competition, Bramlett has collected a 36-28 record, including a 19-9 conference record this season, the most victories in conference play since 2015. She has also guided the Rangers to its deepest postseason run ever, which included the first NJCAA Region 23 championship.

Northwest is seeded fifth in the NJCAA Division II Softball Championship tournament and the Rangers will open competition against 12th-seed Jackson College (Mich.) on Tuesday afternoon at 2 P.M. The game can be seen on the NJCAA Network for a fee of $10 for a one-day pass or a $25 fee to access all tournament games.

Fans wishing to watch the Rangers in-person at Choccolocco Park can buy single tickets for $12, with tournament passes also available for $35 per person. Admission is free for children 12 and under.