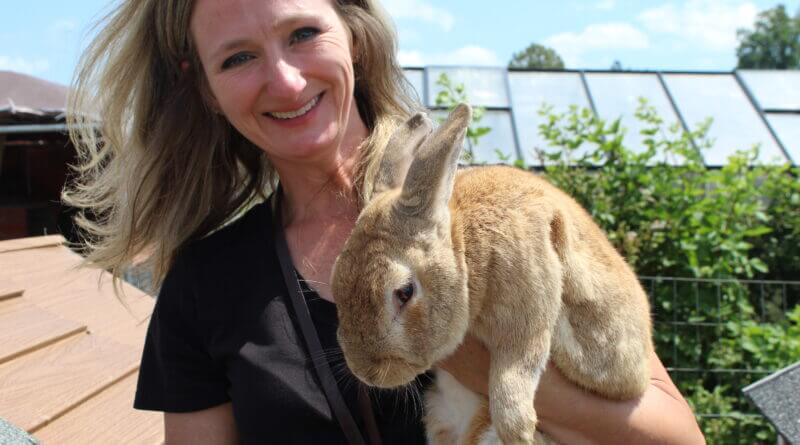 Photo: Center Hill High School instructor Angel Pilcher with one of the rabbits in her farmyard on the school campus. (Bob Bakken/DeSoto County News)

Center Hill High School is growing… literally, thanks to Angel Pilcher and her garden/farmyard.

Pilcher has been a teacher in the DeSoto County School district for the past 16 years, eight of which have been up on “The Hill.” She teaches Nutrition and Wellness and Resource Management at the school.

But over time, Pilcher has gathered a menagerie of barnyard animals and garden items her students have embraced and have cared for as object lessons for many academic areas.

“We’ve got ducks, turkeys, rabbits, chickens, and quail,” Pilcher said. “We’re growing potatoes, carrots, tomatoes, some garlic, onions, pumpkins, squash, watermelons, we’ve got a lot. Anything that can grow in our area we have out there.”

One has to wonder what a mini-Old McDonald’s Farm is doing on the campus of a large high school. But Pilcher said the animals and plants can be used to teach several academic areas, all centered on what she called STEM.

Pilcher said students can get introduced to the many career areas of agriculture if they are interested. “We never run out of things to relate to what we’re doing out there,” Pilcher said.

Much of the area has been paid for through grants, beginning with the first grant Pilcher received a number of years ago through a Foundation for Excellence grant from Michael Hatcher and Associates, an Olive Branch landscaping company.

“I got two raised beds, so we started that up here on The Hill,” Pilcher said. “The kids got to plant what they wanted and they got to harvest it. I wanted to add on to that and I got really interested in chickens so we added chickens for eggs in our cooking lab. It just went on and on.”

Pilcher estimates she has  received around 35 grants for the farm and garden that were funded through donorschoose.org, along with grants from places like Tanger Outlets, Lowe’s Toolbox for Education, which provided a $5,000 grant for the green house, and Home Depot.

Recently, Pilcher and Center Hill received a gift from Michael Hatcher and Associates, a Learning Center outside as part of the farm area.

“It’s a learning garden and Michael Hatcher desperately wanted to give us one,” Pilcher explained. “I didn’t have to write a grant for it and I didn’t even ask for that. It was a gift. It’s such a beautiful addition. The botany class goes out there, we get as many classes to go out there as possible.”

In addition to the classes that are held there during the school day, the farm hosts field trips for elementary students and workshops through DeSoto Soil and Water Conservation, plus Methods Training for Mississippi for Family and Consumer Sciences.

“We use our eggs, produce and herbs in our cooking labs,” Pilcher said. “We  have a greenhouse with a hydroponic system, rain barrels and compost bin. We experiment with aquaponics and hydroponics in the classroom.”

Pilcher feels teaching in the atmosphere with the farmyard aids students in the learning process.

“It’s very rare that we have someone who is not engaged out there,” she said. “We hit so many different learning styles. Collaboration, creativity, critical thinking, all of those things are happening, all of the time. Not to mention the interaction.”

The farm will be cared for during the summer with Pilcher saying she will be out there most every day through the break.

So when Center Hill students come back to class in August, they should be ready to learn and “grow.”