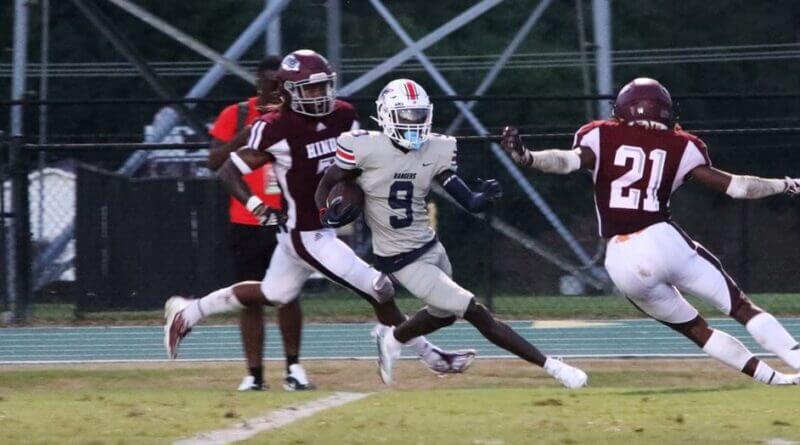 Photo: Drea Shumaker evades a pair of Hinds defenders for his first career offensive touchdown. Despite a strong second half surge from the 14th-ranked Eagles, No. 4 Northwest held on for the 31-28 victory on Thursday night.(Courtesy photo)

It’s never over until the final whistle and fourth-ranked Northwest experienced that adage firsthand on Thursday night.

After building a comfortable 24-0 halftime lead, the Rangers were outscored 28-7 over the course of the second half, as No. 14 Hinds chipped away at the deficit. The Eagles scored with 18 seconds left, but failed to recover the onside kick attempt, allowing Northwest to hang on for the 31-28 win.

Northwest improved to 2-0 on the season and ran its all-time record against Hinds to 31-18-3. The win also spoiled a revenge attempt from the Eagles in a rematch of last year’s MACCC title bout, while dropping Hinds to an 0-2 start.

On its opening drive, Northwest was able to get the ball into the Hinds’ red zone, but the Eagles defense ultimately kept the Rangers out of the end zone. Eli Hamlin made sure the possession wouldn’t end empty-handed however, as the sophomore from Terry booted a 24-yard field goal through the uprights, giving Northwest a quick 3-0 lead.

After Hinds came up with nothing on its first possession, the Rangers added to their lead with an 11-yard rushing touchdown from D.T. Sheffield. Hamlin followed with the successful point-after attempt, pushing Northwest to a 10-0 lead with 5:55 to go in the first quarter.

With 8:32 to go in the second quarter, Ren Hefley recorded his first passing touchdown as a Ranger, as the Presbyterian College transfer connected with Sheffield on a 21-yard score. Hefley would add another passing touchdown on the next possession, this time connecting with Drea Shumaker for a 47-yard score and putting Northwest ahead 24-0 late in the second quarter.

For as hot as the Northwest offense was in the first half, the Hinds’ defense cooled things down to start the second half. With both teams in a stalemate for most of the third quarter, the Eagles broke the silence with a seven-yard touchdown from Jeffery Pittman. The play marked Hinds’ first trip to the end zone this season and cut the deficit to 24-7, with 4:51 remaining in the third.

Early in the fourth quarter, Pittman struck again, scoring on a 50-yard touchdown to close the gap to 24-14 with 11 minutes to go. Northwest would respond on the next possession though, as Jamarien Bracey scored from seven yards out to push the lead back to 31-14.

However, Hinds was far from finished. Feeling the momentum from its home crowd, the Eagles countered with a short touchdown from Jamarian Samuels, once again closing the gap to 10 points with exactly seven minutes left in regulation.

Desperate to burn some clock, Northwest was able to do just that on its next offensive drive. However, the possession resulted in no points for the Rangers and Hinds got the ball back late in the fourth. With 18 seconds to go, Ruben Lee connected with Michael Lott on a 26-yard passing touchdown, pulling the Eagles within a 31-28 deficit.

Hinds then went for an onside kick in an attempt for a quick game-winning drive. Although the Eagles initially got the ball, the kick did not go 10 yards before being recovered by Hinds, which by rule gave Northwest the ball back to close out the game and escape another close contest.

Northwest edged Hinds in total yards, 373-367, while out-gaining the Eagles 274-211 through the air. Hinds did get the best of the Rangers on the ground though, rushing for 156 yards against 99 for Northwest.

Hefley completed 20 of his 32 pass attempts for 274 yards and a pair of touchdowns, while Lee went 19-for-36 with 211 yards and a touchdown for the Eagles. Hefley’s top target on the evening was E. Jai Mason, who led the Rangers’ receiving corps with 85 yards on four receptions. Sheffield and Jaycob Horn came away with five catches apiece, with Horn accounting for 52 yards.

On the ground, the Rangers were led by Bracey’s 80 yards on 20 carries. Meanwhile, Hinds was carried by 117 yards on 18 carries from Pittman and by 105 yards on nine catches from Lott.

Defensively, Sam Brumfield led the charge with nine tackles and 1.5 tackles-for-loss. Rontavious “Dude” Person and Jaylen Powell accounted for seven tackles each, followed by six from Stephen Hall and five from reigning MACCC/NJCAA Defensive Player of the Week Jykeveous Hibbler. Three of Hibbler’s five tackles were for loss, including two sacks.

For Hinds, Ben Duncan booted eight punts for 273 yards and Samuels returned two kicks for 81 yards, including one for 55. Jerrell Boyd also returned a pair of kickoffs for a combined 45 yards.

Next up for Northwest will be a road test at Pearl River on Thursday, September 15. The Rangers are 13-26 all-time against the Wildcats and the two teams last met on Sept. 7, 2017, when Northwest scored a 34-21 victory in Poplarville.

Pearl River enters the matchup with a 2-0 record after wins against Holmes and Northeast. The Wildcats are unranked, but were receiving votes in this week’s NJCAA poll. Kickoff from Poplarville and Dobie Holden Stadium is scheduled for 7 p.m.