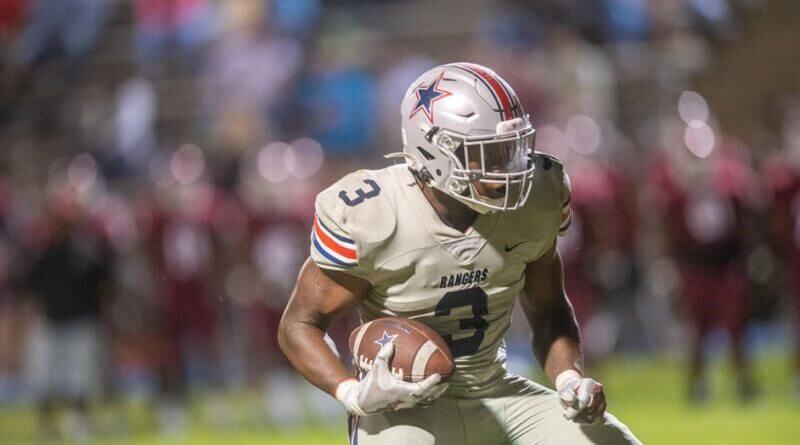 From the bleachers to the sidelines, stress was felt all across Bobby Franklin Field in Thursday evening’s season-opener between No. 4 Northwest and Mississippi Gulf Coast.

In what turned out to be an absolute roller-coaster for both teams, the Rangers got the 28-24 edge against the Bulldogs, holding off last minute heroics from the MGCCC offense.

Mississippi Gulf Coast took an initial lead, only for Northwest to score 18 unanswered points. The Bulldogs rallied back however, recapturing the lead in the fourth quarter, before sophomore quarterback Ren Hefley scored one of his two rushing touchdowns with two minutes remaining.

After Northwest gave the ball back to MGCCC with 44 seconds left to go in regulation, the Bulldogs were able get the ball to midfield, but the drive stalled after quarterback Pat McQuaide threw four straight deep incompletions, the final one coming as the winning horn sounded.

Although Northwest would go into halftime with the lead, it was the Bulldogs who found the end zone first. With four minutes remaining in the opening quarter, McQuaide connected with Keymari Odum on a nine-yard touchdown pass, capping off a 10-play drive.

Northwest was left searching for answers on offense for most of the first quarter, but a solid rugby-style punt from Shade Foster helped turn the tide in favor of the Rangers. With the punt pinning MGCCC at its own two-yard line, Rontavious “Dude” Person delivered the pressure to force McQuaide into an intentional grounding penalty, resulting in a safety for the Rangers and a 7-2 score entering the second quarter.

With Northwest on offense to start things off in the new quarter, the Rangers marched downfield on an eight-play drive that ended in a 29-yard field goal from Eli Hamlin, closing the gap to 7-5. On the Bulldogs’ next possession, Jaylen Powell’s interception helped place the Rangers at the six-yard line, where Jamarien Bracey would quickly score and give Northwest an 11-7 advantage.

Though the Bulldogs threatened a response on their next possession, MGCCC stalled out at the Rangers’ 26-yard line after a 12-play drive. From there, Northwest would make another march to the red zone, only to come up empty-handed on a missed field goal attempt.

With 3:36 to go in the first half, Mississippi Gulf Coast was once again forced to punt, setting up a 38-yard return from D.T. Sheffield to the Bulldogs’ six-yard line. One play later, Hefley took it himself to the left and into the end zone, pushing the Rangers’ lead to 18-7.

Despite the Rangers’ newfound energy, it was the Bulldogs that would close the first half on a high note. A seven-play, 55-yard drive was highlighted by McQuaide’s 38-yard completion to Odum and capped off by a successful 28-yard field goal attempt from Gabe Showalter, sending MGCCC to the break down 18-10.

After both teams traded possessions to open the second half, Northwest used a series of runs from Bracey and Cayden Betts to knock on the door of the end zone. However, the Bulldogs’ defense bent but didn’t break, keeping the Rangers out of the end zone. Hamlin saved the drive with a 22-yard field goal, improving the lead to 21-10 midway through the third.

Ten plays later, Mississippi Gulf Coast punctuated a 68-yard drive that ended in an eight-yard rushing score from Cam Thomas. The drive brought the Bulldogs within 21-17 and early in the fourth quarter, a 21-yard touchdown pass from McQuaide to Rico Dorsey sent MGCCC ahead with eight minutes left, 24-21.

Northwest countered with a nine-play, 78-yard drive that ended in a 10-yard Hefley touchdown, allowing the Rangers to regain the 28-24 lead with two minutes to go. Despite a late comeback attempt from the Bulldogs, Hefley’s score would wind up as the game-winner.

Offensively, Northwest was led by 123 yards and a touchdown on 25 carries from Bracey, while Hefley finished 12-for-20 with 165 yards and a pair of rushing scores. Jaycob Horn caught six passes for 58 yards, while Sheffield hauled in four receptions for 51 yards.

McQuaide led the offensive efforts for MGCCC, finishing 25-of-46 for 275 yards and two touchdowns. Odum and Ramone Bradley each finished with 100-plus receiving yards, with Bradley bringing in 11 catches for 113 yards.

Drake Thornton had seven tackles to lead the Bulldogs, while JaQuan Copeland, Josh Phillips and Torran Coppage-El each finished with six tackles.

Northwest edged out Mississippi Gulf Coast in total yards by a 369-345 margin.

Next up for Northwest is a road tilt at Hinds on Thursday, September 8. Kickoff is slated for 6:30 P.M. in Raymond