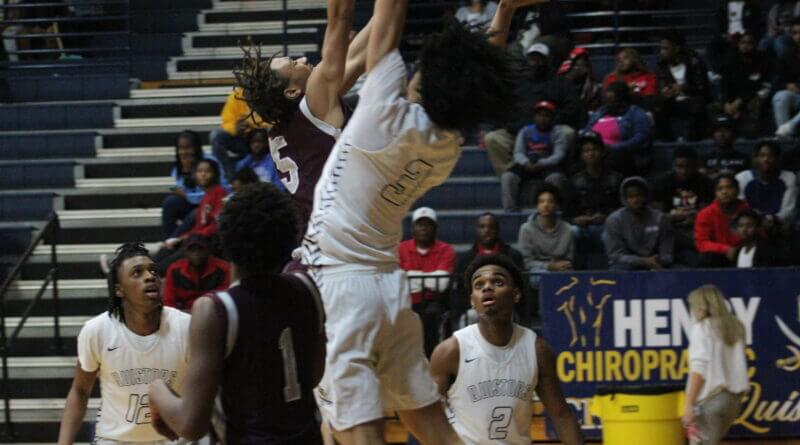 Five Quistors scored in double figures, led by Darren Davis with 18 points. Jaylyn Tyler scored 14 followed by the trio of Caleb Hunt, Terry Joyner, and Landon Jeffries with 12 points each.

The Eagles countered with 19 points from Dimp Pernell, 18 from Conner Simms, and 12 from Ky Pernell.

Horn Lake coach William Bentley liked the effort of his Eagles, despite coming it short on the scoreboard.

“We haven’t played Olive Branch in this building in years and we know coming in that it was going to be a big test of where we were at,” Bentley said. “They gave everything they had and then some.”

Olive Branch jumped on the Eagles in the first quarter, taking a 19-8 lead after eight minutes. Davis led by balanced scoring effort in the quarter with six points while Simms score four of the Eagles eight first-quarter points.

Both teams came out of the locker room at halftime and found the range. Olive Branch outscored Horn Lake 23-18 in the third quarter and the Quistors led by Hunt with eight of his 12 points coming in the period. Dimp Pernell picked it up for Horn Lake with eight points in the period after halftime.

The Eagles made a run at the Quistors in the fourth quarter, getting the lead cut to four points at one time, before Olive Branch was finally able to put it away.

“We finally started rebounding better,” Bentley said. “You could see that we got more confidence. We never quit and I’m excited. I wish we could play tomorrow.”

“We just started to execute and settle down a little bit, work on getting a couple stops and a couple scores and we were able to do that,” Rombaugh added.

Horn Lake came into Olive Branch and knocked off the three-time defending state champions on their home floor 57-50 Friday evening. The Lady Eagles, which led for much of the game, still needed to break a 40-40 tie at the end of the third quarter to win the game. They did that with Indiya Bowen scoring 10 of her game-high 16 points in the final eight minutes of the game. Meanwhile, Horn Lake clamped on the Olive Branch offense, holding the Lady Quistors to only 10 points in the final quarter.

Olive Branch was led by Rhema Pegues with 16 points and Trinity Pleas with 10.

Lipford ignited the Horn Lake offense in the first quarter with nine of her 11 points in the period, as the Lady Eagles took a 24-18 lead. Pleas answered for Olive Branch with eight first-quarter points.

Addison Howell and Pegues helped the Lady Quistors cut into the lead in the second quarter with four points and Olive Branch held Horn Lake to just six points before halftime. Miracle Lee had four of the six points for the Lady Eagles in the second frame, as Horn Lake still had a 28-24 lead at the break.

Olive Branch continued cutting into the Horn Lake lead in the third quarter, which ended with a 40-40 tie. Johnson paced Horn Lake with five points in the quarter and balanced Olive Branch had five players with points, including Pegues with three.

Bowen took over the final eight minutes to help put the game away.

The second annual Shan Whiteside Sideline Cancer Basketball Classic schedule has been announced. The classic is named for the first basketball coach at DeSoto Central and this year’s event will be a two-day classic of games at the Shan Whiteside Gymnasium.

Here’s the schedule of games.