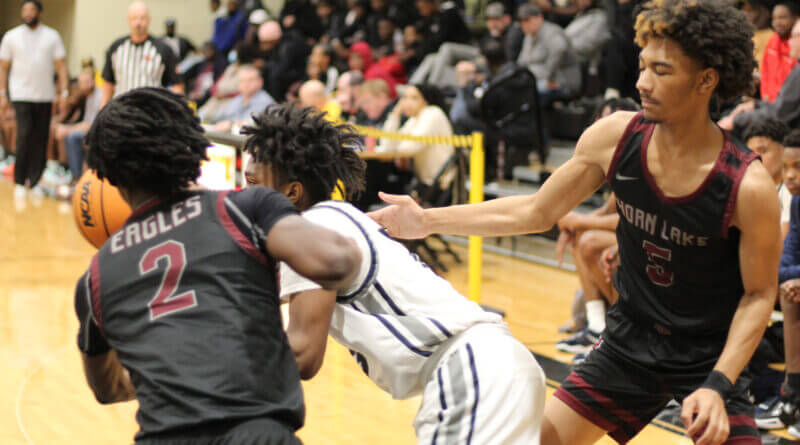 HORN LAKE 66, MOSS POINT 35: The Eagles used a combined 40 points from the Pernell twins and 11 more from Conner Sims to beat the Tigers from the Gulf Coast.

Horn Lake started strong with a 26-8 lead after one quarter and led 41-16 at halftime. The lead grew to 61-27 when the third quarter ended and with the large lead, the fourth quarter was played with a running clock not stopping except for timeouts in the final eight minutes of the game.

The Eagles were led in scoring by Kyren Pernell, who received the game’s MVP award with a team-high 21 points, 12 of which were scored in the third quarter. Pernell sank a trio of three-pointers among his 21 points.

“The defensive details, more than anything,” Potts said. “That’s going to be the determining factor in how we do and how we finish up. I thought we did a good job of imposing our will on them (Moss Point).”

OLIVE BRANCH 70, FOREST HILL 41: Jaylyn Tyler scored 15 points to earn game MVP honors and lead the Conquistadors to the easy victory over the Patriots. Most of Tyler’s point production came in the second quarter, when he scored 13 of the team’s 33 points for a 43-23 halftime lead. The Quistors continued to pour it on the Patriots in the third quarter, as Olive Branch held Forest Hill to just seven points while scoring 23 for a 66-30 edge. With the large lead, the fourth quarter was played with the running clock.

Joining Tyler with game-high scoring honors was Reece Garrison, who also scored 15 points, nine of the total scored in the second-quarter outburst.

Riyan Nelson of Forest Hill scored 14 points to lead the Patriots in the loss.

Playing less than 24 hours after an intense and hotly-contested 79-71 district win at rival Center Hill Friday night, Olive Branch coach Eric Rombaugh was pleased with how his team responded.

“Coming around to play a good team today, the boys responded better than I expected,” Rombaugh said. “They did a great job on defense, talking and rotating on offense, sharing the ball, and we shot the ball well today.”

CLEVELAND CENTRAL 72, CENTER HILL 30: The Mustangs struggled from the start against the 5A Wolves, trailing 28-9 after one quarter and 48-13 at halftime. The 35-point lead meant the entire second half went to a running clock but that didn’t stop Cleveland Central from posting 20 points to the Mustangs’ nine in the third quarter.

Jhordan Chaffin and Nic Warner were the leading scorers for Center Hill in the contest with nine points each.

Jayden Sampson led Cleveland Central with 23 points in the victory.