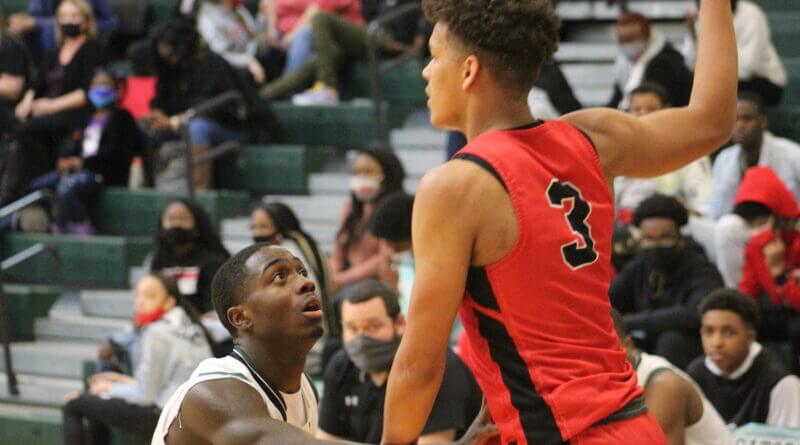 THE VITALS: DeSoto County’s two MHSAA 5A basketball programs took the court for the first time against each other this year in a District 1-5A tussle. Tuesday’s boy-girl doubleheader ended in a Center Hill sweep, with the Mustang boys handling the Gators 83-51 and the Lady Mustang girls fashioning a 59-39 victory over the Lady Gators.

CENTER HILL BOYS 83, LAKE CORMORANT 51: Last year’s MHSAA 5A state boys’ basketball runner up Center Hill left no doubt it wanted to remain king of District 1-5A this year in its surprisingly easy 83-51 victory over the Gators at Lake Cormorant.

Four Mustangs in particular help drive the point that they want to remain the squad others will have to go through if they want to make a deep run in the state playoffs this year. The Center Hill quartet each hit double figures in the battle between the county rivals.

Kaeden Laws led the way on the scoresheet for the Mustangs with 22 points, Zandon Haralson scored 19 for Center Hill, followed by Tanner Burcham with 18 and Calvin Dockery finishing with 15.

“I got to give our players a lot of credit,” said Center Hill coach Newton Mealer. “I think our guys were locked in 100 percent. They executed our game plan to perfection.”

It was Dockery who helped the Mustangs gallop off from the start with nine of his 15 points in the first quarter, as Center Hill took a 15-10 lead.

Laws took over in the second quarter, knocking down a pair of threes among his 11 points in the quarter, as the Mustangs brought a 38-25 lead to halftime.  Donovan Sanders’ nine points helped the Gators keep pace through the first 16 minutes of the game.

But, Burcham led Center Hill out of the locker room into the second half with a pair of threes among his eight points in the third quarter as the lead grew to 58-37 Center Hill going into the fourth quarter.

Haralson helped end the night with a pair of treys for nine points in what became a 22-point win.

Marshall Odum led Lake Cormorant in the second half with seven of his 13 points coming in the closing 16 minutes of the game.

Sanders finished the night with 12 points for Lake Cormorant and Damian McKnight added 10 in the losing effort.

Both teams came into the contest struggling to regain a winning edge. Lake Cormorant has now won just one of its last five, a string that started with a 52-49 district opener loss to Saltillo on Dec. 18.

Center Hill won just one of three games in the elite NXTLVL Hoopfest played during the holidays in Nashville, Tennessee. The Mustangs lost its first two games before a win in its final appearance at the tournament gave them a seventh place finish.

“Lake Cormorant’s a good basketball team,” said Mealer. “Tonight was our night and we just had something we wanted to prove.”

The visitors were staked to a 13-7 first quarter lead, with Kayleigh Prentiss scoring eight of the Lady Mustangs points in the opening period.  Aniya Hayes answered for Lake Cormorant with four of her team-high 11 points in the first frame.

Hayes continued her scoring leadership with five second-quarter points for the Lady Gators, but Jazmine Riley scored all of her six points for the game in the second period to help Center Hill take a 26-19 edge into halftime.

Candace Buford took charge of the Lady Mustang offense in the second half with 11 of her game-high 16 points after halftime, including nine in the third quarter alone.

The Lady Mustangs led 44-32 going into the final eight minutes of the game on their way to the 20-point victory.

After Buford, Hope Mealer and Prentiss finished with 12 points each. Hayes was supported by Taliyah Austin, who scored eight points for Lake Cormorant.

(Note: Photos from both games are found on the DeSoto County Sports Facebook page.)