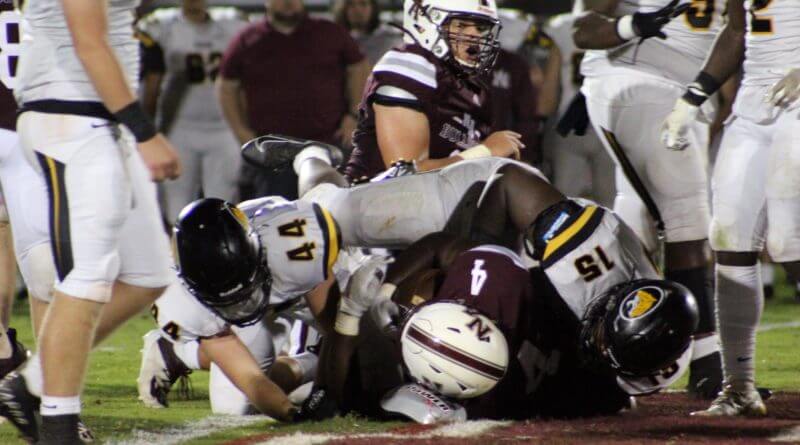 The Hernando football Tigers came away from New Albany with a victory they felt was badly needed for their season on Friday, Sept. 18, outracing the Bulldogs to a 59-35 win.

It was Hernando’s first victory of the season after falling twice to open the year. New Albany dropped to 1-2 for the year.

The Tigers saw a close one get away to open the year in a 14-13 loss to highly regarded South Panola and were dropped by county rival Center Hill 42-28 last week coming into Friday’s contest at Kitchens Field in New Albany.

“We’ve been so close, with the last two games really coming down to the final minute,” said Hernando coach Will Wolfe. “The kids have done a great job, and the assistant coaches have been great. We have some things we have to work on but I was really happy that we were able to finish this one.”

New Albany took the early lead with a 17-yard touchdown run by A.J. Nugent to lead 7-0 in the first quarter, but Hernando cut the margin to 7-3 at the end of the quarter when Jackson Uselton hit on a 33-yard field goal.

The second quarter was a back-and-forth affair with Hernando taking its first lead after a 13-yard scoring strike from Zach Wilcke to Reed Flanagan gave the Tigers a 10-7 edge.

But New Albany answered with a 20-yard touchdown pass to Micah Reed for a 14-10 advantage with 2:49 left before halftime.

Two minutes later, the Tigers scored again, this time a 38-yard touchdown reception by Ryan Smith, the first of two on the night for the senior that made the halftime score 17-14 Hernando.

“He’s worked so hard,” Wolfe said of Smith, “He deserves all the good things that happen to him.”

Hernando took the second half kickoff and the game quickly resembled a NASCAR race as both teams tried to put points on the scoreboard faster than the other team.

Wilcke hit Flanagan again on a 31-yard pass reception for a touchdown just 21 seconds into the third quarter for a 24-14 Hernando lead.

However, the Bulldogs would bite back hard and fast when Cameron Knox caught a 53 yard pass from quarterback Joe Mathis for a score, which got New Albany back within 24-21.

Fortunes quickly went New Albany’s way as the next kickoff was fumbled by the Tigers and the Bulldogs jumped on the loose ball, recovering it at the Hernando 20-yard line. That was followed by a two-yard TD run from Shamarquces Smith for a 28-24 Bulldog lead with 8:59 left in the quarter.

The Tigers regrouped and Wilcke connected with Smith again, this time from two yards away and Hernando regained the lead in the contest at 31-28.

Neither team was done pasting points on the scoreboard in the quarter, however. Knox took the ensuing kickoff and went through the Hernando defense 75 yards for yet another New Albany touchdown as a 35-31 Bulldog lead.

That would be the final points of the night for the home team, however. Hernando scored twice more in the final 3:29 to end the quarter with a 45-45. The Tigers got two more touchdowns to end the game with a 59-35 victory.

Wilcke threw six touchdown passes for the night as he was able to carve up the Bulldog secondary.

“What I love about Zach is that he owns everything,” Wolfe said. “He feels responsible for every play, and every game. He’s a great leader, but we’ve got a bunch of great leaders on this team.”