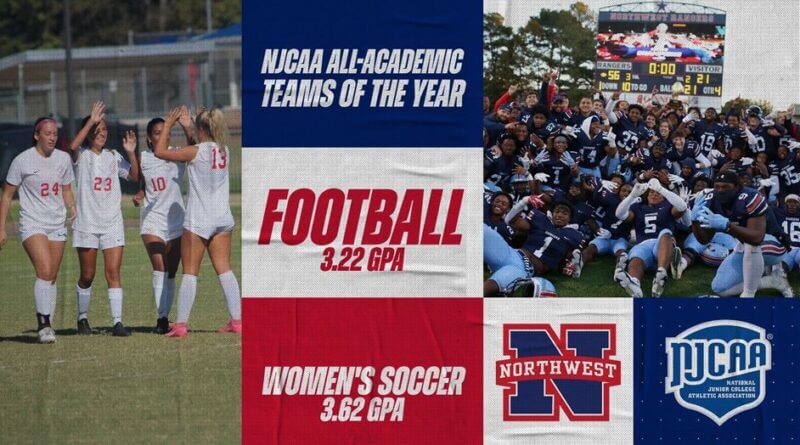 Two Northwest teams garnered Academic Team of the Year recognition from the NJCAA, as football and women’s soccer led the nation in team GPAs. The Ranger football team posted a 3.22 GPA, while the Lady Rangers’ soccer squad came away with a 3.62 GPA. This is the first NJCAA Academic Team of the Year award for the women’s soccer program and the football program was one of only two teams in the nation with a 3.0 GPA or better.

Additionally, several more Northwest teams earned cumulative GPAs of 3.0 or better, including baseball (3.41), women’s basketball (3.60), softball (3.73) and volleyball (3.72). Of those four sports, softball finished with the fifth highest GPA in the nation, while volleyball (8th), women’s basketball (10th) and baseball (18th) also finished within the top 20 among highest GPAs.

Northwest also had a record of 77 student-athletes earn individual appointments to NJCAA All-Academic teams, up from last year’s total of 52. Included in that total were 21 first team honorees, a new record that shattered the previous total of 19 selections from the 2020-21 academic year.

To be eligible, student-athletes had to achieve an overall GPA of 3.60 or higher for the 2020-21 academic year. The criteria for the three All-Academic teams are listed below: