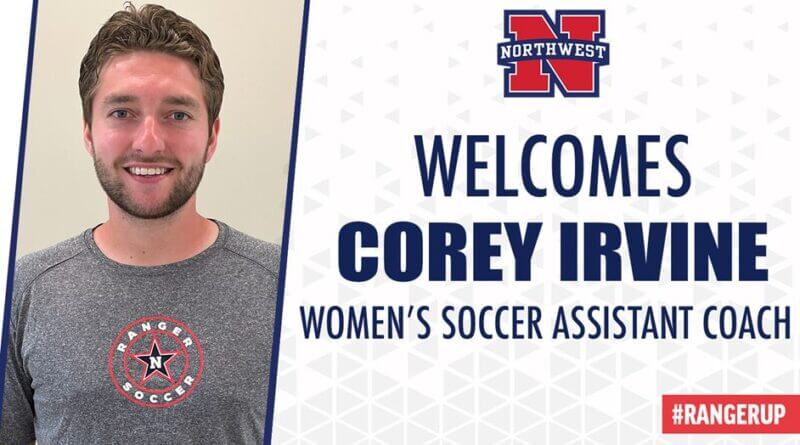 With less than a month remaining until the start of the 2022 season, Northwest women’s soccer head coach James Beattie has made an addition to his coaching staff.

“I think the basis of every great coaching staff is relationships,” Irvine said. “Coach Beattie and I have that great relationship already. We have known each other for several years, we played together back in Scotland and he helped me get from my first community college stop to the next one. It has been a long time coming and I am chomping at the bit to get started.”

Irvine comes to Northwest after a stint as a student assistant coach for the Georgia Southern University men’s soccer program during the 2021 season, after playing with the Scottish-based Petershill Football Club in 2020. As a junior in 2019, the Glasgow, Scotland native made eight starts for Georgia Southern and played in 14 total matches, collecting two assists.

Irvine’s playing resume also includes a year and a half with Partick Thistle Football Club in Glasgow, where he played alongside Beattie. He holds an associate of science degree from Northeast Texas Community College and a bachelors degree in interdisciplinary studies from Georgia Southern.

“He is going to bring a different level to our program,” Beattie said. “This is a program that is growing and adding staff, and he is someone with a great knowledge of junior college soccer. We were teammates back home and I have been in contact with him while he was playing in America. He is someone that I can trust and bring in to not miss a beat.”

Northwest will take on Delta State in an exhibition match on Aug. 13 in Cleveland, before opening up the regular season on Saturday, August 27 against National Park College.  The Lady Rangers will be aiming to exceed last season’s 15-3-1 finish, that saw the program advance to the MACCC/Region 23 Semifinals.