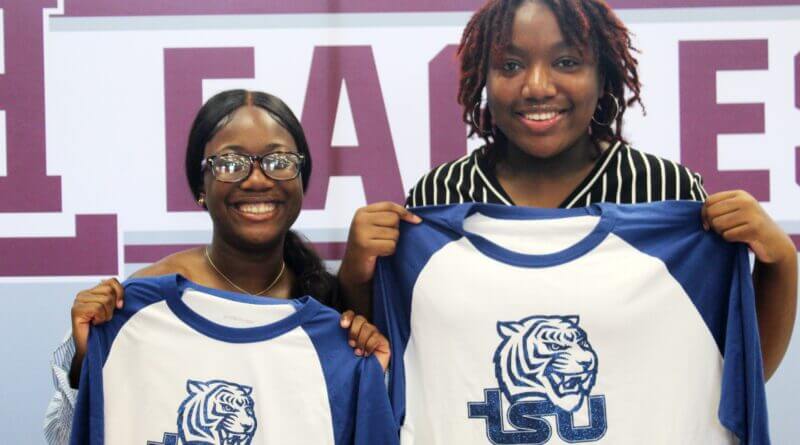 We’re just a week away from the start of the 2022-23 school year but there’s apparently still some scholarship money to be passed out to the Class of 2022.  Just ask Horn Lake graduated seniors Jayden Pointer and Katelyn Gatewood.

Pointer and Gatewood are choral students of Holly Beck at Horn Lake High School. They were interested in continuing their musical education but still had not committed to a school. Beck went to work to explore the scholarship possibilities for the pair.

The search would lead to making a connection with Dr. Angelica Dunsavage, the head of the choral program at Tennessee State University who is starting her second year at the Nashville, Tennessee HBCU (historically black college or university).

When Beck asked Dunsavage about scholarship money, the reply was “yes,” and because of the lateness of the summer, a recording Beck had of Pointer and Gatewood was sent to Nashville.

It was that recording that led Dunsavage to offer both Pointer and Gatewood a choral scholarship, which accomplished two things for the students: money to help pay for their education, and having the ability to attend an HBCU university, something they both wanted to do.

“She has several students from Memphis, but this is her first group coming from DeSoto County,” Beck said.

It also means that Beck’s program at Horn Lake has now received scholarships to HBCU choral programs for the first time in school history.

A “signing” event was held Monday morning at Horn Lake High to celebrate the scholarships.

Pointer said she was excited about the scholarship as she felt high school would be the end of her music career, and to be able to do it at a school she wanted to go to.

“I weighed my options but I knew I wanted to attend an HBCU,” Pointer said. “This is a win-win and that makes it very exciting.”

Gatewood said she has been singing since sixth grade, she said, and is also looking forward to college life.

“They didn’t have to do this (offer the scholarship), so I’m grateful,” Gatewood said. “My momma wanted me to go to an HBCU.”

Pointer said she would be studying nursing at Tennessee State, while Gatewood will pursue a health sciences degree with plans to become a physical therapist.