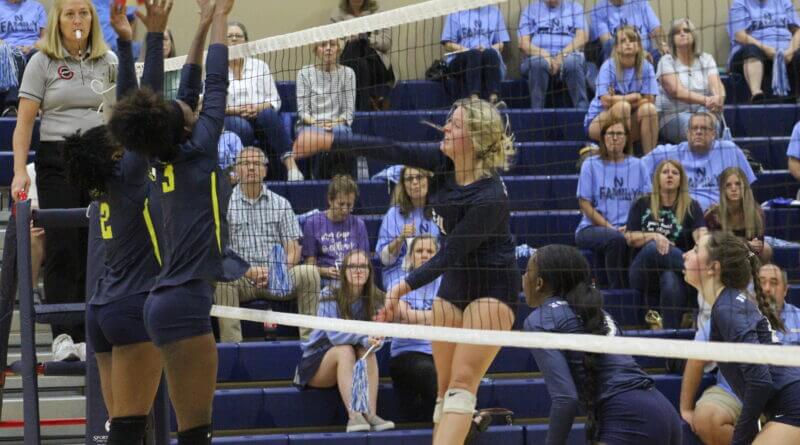 The Northpoint Christian School volleyball team advanced to the semi-finals of the TSSAA Division II-A West Region tournament on Monday with a three-set victory over Lausanne Collegiate in the Northpoint gymnasium. Scores of the match were 25-16, 25-12, 25-15.

With the victory, Northpoint, which is hosting the Final Four of the postseason tournament, plays First Assembly Christian School at 6:30 p.m. Tuesday evening. St. George’s of Collierville plays Evangelical Christian School in the other semifinal match at 5 p.m.

Against Lausanne Monday evening, Northpoint rallied from falling behind early in the first set to gain an 11-11 tie. From there, the Lady Trojans took a 17-13 lead to force a Lausanne timeout. Northpoint won the set going away from there, with a 20-15 lead after Hassie Claire Thurman scored a point off a Lausanne block. Brylee Faith Cherry scored on a kill and off a Lausanne block to get the Lady Trojans to 23-16. Quinn Thurman scored off a block and a Lausanne serve fell short of going over the net for the final 25-17 score.

In the second set, Northpoint broke a 4-4 tie with a kill by Maycee Gross and never trailed after that, although Lausanne did tie the set at 5-5 with a sideout when a Northpoint serve fell short. The Lady Trojans scored five of the next six points for a 10-6 lead and a Lady Lynx timeout. It did little to stem the tide, however, as a Sophie Bauer service ace made it 15-8 Northpoint and a Lausanne volley that failed to go over made it the 20-10 for the Lady Trojans. The set ended 25-12 after a Lausanne net serve.

For the night, Bauer had 34 assists, 13 digs and served five aced in the match. Reid made nine kills and had three blocks. Cherry finished with eight kills, five blocks, four digs and served an ace.

NORTHPOINT GIRLS SOCCER FALLS AT ST. GEORGE’S: In the second round of the TSSAA Division II-A West Region girls’ soccer playoffs, Northpoint Christian School saw its season come to an end with a 9-0 loss to St. George’s Independent School in Collierville, Tennessee.

St. George’s scored five goals in the first half and three quick goals increased the margin to 8-0 in the early part of the second half. After a ninth goal was scored, the match was called with about 12 minutes left in the game.

“As a whole, we had a really good year,” Northpoint coach Ethan McClure said after the match. “Coming off last year where we only tied one game and ad zero wins, we made big steps forward. It’s been a much better season than we had last year.”

Northpoint loses five seniors who graduate from this year’s squad and will have three juniors returning to the roster for next fall. The youthful Lady Trojans finished the season with a 6-8-1 record.