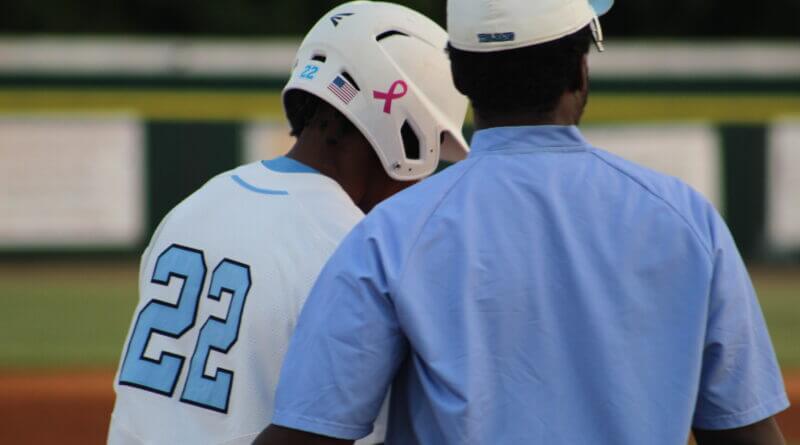 It’s back to the Spring Fling for the Northpoint Christian School baseball team, after a doubleheader sweep of Clarksville Academy in the TSSAA Division 2-A state quarterfinal round.

Thursday’s 17-4 and 5-0 victories put the Trojans into the semifinal round on Tuesday, May 24 at Middle Tennessee Christian School in Murfreesboro, Tenn.

“Making it to Murfreesboro and last year and being able to repeat is hard,” said Northpoint coach Stephen Kirkpatrick. “It’s hard to keep from getting complacent and take things for granted, but these guys worked so hard. They just came together today and played absolutely great baseball.”

The Trojans immediately took control of the first game with a 12-run first inning. Four consecutive walks scored the first run in an inning that saw nine walks by Cougar pitchers. Northpoint followed with three in the second inning, and single runs in the third and fourth frames on their way to the five-inning victory. Clarksville Academy did score four times in the fifth, but it was far from enough to keep the game going, a contest called by the run rule.

Jackson Thomason led the Northpoint offense with three runs scored. Hudson Brown had five RBIs to go with two hits and two runs scored. Brown and Rob Hayes came up with doubles against the Cougars in the contest.

Smith struck out nine and walked two in 4.1 innings, with Conner Cavette facing the final two batters in the game.

As Brown dominated the Cougars at the plate in the first game, he took over and dominated Clarksville Academy batters in the nightcap with 11 strikeouts in the 5-0 victory.

The junior righthander struck out 11 and walked two for the win. Brown also had two hits and a run-batted-in at the plate.

Northpoint took a 1-0 lead in the first on a ground ball single by Connor McKnatt that brought Hayes home.

The Trojans added insurance in the sixth inning with four more runs scored.

“About the third or fourth inning I thought Hudson had a CG (complete game), so can we score enough to let him make it,” Kirkpatrick said. “After that four-spot in the fifth, I thought Hudson was going to be hard to beat. The last two innings he was lights-out.”

Brown got the final out on a strikeout thrown to Rudy Sleigh.

With the victories, Northpoint carries a 27-9 record into the Spring Fling Final Four baseball double-elimination tournament.  Kirkpatrick sees similarities in this year’s club and the team that was second in last year’s state tournament.

“Very similar in a lot of respects,” Kirkpatrick said. “We have a lot of guys back from last year. This team probably hits the ball a little bit better and pitching is there, hopefully, whenever we need it.”

HERNANDO-PETAL SERIES NOW EVEN: The MHSAA 6A state softball championship series at Southern Miss will come down to a final game Saturday.

Defending state champion Hernando, after a game-one victory over Petal Wednesday, had its best-of-three series evened at 1-1 with Petal’s 7-2 win over the Lady Tigers Thursday afternoon.

The deciding game in the series will be Saturday afternoon at 3 p.m. on the USM Softball Complex diamond in Hattiesburg.

After both teams scored solo runs in the first inning, the Lady Panthers scored twice in the second and once in the third and fourth frames for a 5-1 lead. Hernando answered with a run in the fourth but Petal put single runs on the board in the fifth and seventh innings as insurance.

Natalie Herrington, who threw in the first game of the series on Wednesday, pitched again on Thursday and picked up the victory.  Julia Shaw took the loss for the Lady Tigers.

Petal came up with nine hits and Hernando had eight in the game, but Hernando committed four errors.

Rylee Eyster led the Hernando offense with three hits in four at-bats. Janna Shaw and Katelyn Kirkpatrick each had one RBI from the plate.

Kinley Hogue again led the Lady Panthers at the plate with two hits and three runs driven in.

Herrington struck out seven Hernando hitters and walked one. Julia Shaw gave up six of the seven Petal runs and three were earned in 4.2 innings in the circle.

Janna Shaw finished the game with the ball for Hernando.