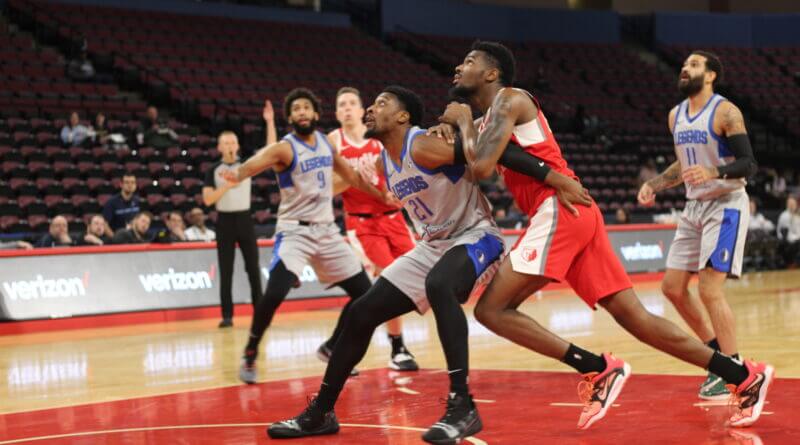 Memphis Hustle basketball coach Jason March has been preaching defense to his team in the early part of the NBA G League season called the Showcase Cup.

The sermons are going to have to continue for the foreseeable future as it appears March’s “congregation” hasn’t gotten the message, yet.

The Hustle gave up the second-highest point total scored by the opposition this season Tuesday night in a 139-129 loss to the Texas Legends, before 482 fans who braved a weather threat to watch the action.  Memphis allowed 149 points to Rio Grande Valley in a 149-124 loss on Nov. 17.

The loss dropped the Hustle’s record in the Showcase Cup series to 3-5, while the Legends’ record moved over .500 to 6-5.

March said the Hustle needs to have a better defensive commitment on a nightly basis.

“I thought we played really well in the fourth quarter, the guys gave us everything they had,” March said. “We can’t wait three quarters to do that when you give up that many points. It’s all about defense for us and we’re going to have a long season if we don’t start guarding.”

The Hustle had a brief lead in the first half at one point, but when the Legends took control of the game they never let go, forging as large as a 26-point advantage at one point in the contest.

Texas led 36-31 after one quarter and had a 70-56 edge over Memphis at halftime. The Legends came out hot in the third quarter, putting up 48 points against the Hustle’s 37 to build a 118-93 lead going into the final period.  Memphis would put up 36 points in the final 12 minutes to Texas’ 21.

Starting guard Dakota Mathias, a returning rights player for Memphis who played collegiately at Purdue and had made 46 career G League appearances, all with the Legends before coming to the Grizzlies/Hustle organization, finished with 27 points. Much of his scoring came late in the contest, however.

It was Matt Hurt, another returning rights player who played college ball at Duke, that led the team in scoring for much of the game before Mathias’ late scoring spurt. Hurt played 21 minutes off the bench and also finished with 27 points.

March said Hurt, who has struggled early in the season, had an opportunity and took advantage of it.

“There’s still a lot of things he can do better, but he was making some shots and making the easy plays,” March said.

After Mathias and Hurt, five other Memphis players scored in double figures.

The schedule puts the Hustle and Legends into a back-to-back series with game two set for Wednesday night, 7 p.m. at the Landers Center. Last season, Memphis failed to win the second game of a back-to-back at home, finishing 0-2 in home second games.

March wants to get his team back on the floor, especially after Tuesday’s performance.

“We started to do some things better in the fourth quarter and I kept telling the guys that,” March said. “I’m very glad that we get to play them again tomorrow because we need to get back on the court.”

Memphis played Tuesday without both of the organization’s two-way players. Kenneth Lofton Jr. and Vince Williams Jr, both were not in the lineup for the Hustle.

HOME TOWN BOY RETURNS HOME A LEGEND: Among the 482 fans who braved the weather for Tuesday’s game were likely a few fans of a certain player on the visiting team. Former Southaven High School star Taze Moore, a standout at California State-Bakersfield and Houston after his prep career with the Chargers, played 25 minutes off the bench for the Legends and finished with 10 points, including a pair of three-pointers.

Moore came to the Legends after spending four games in the summer league with Brooklyn and after etching his name is in the Cal State-Bakersfield record books. He is the first in school history to get to 500 career points, 200 rebounds, 100 assists, 75 steals and 50 blocks.  He also was named to the American Athletic Conference all-tournament team in his one year with Houston.