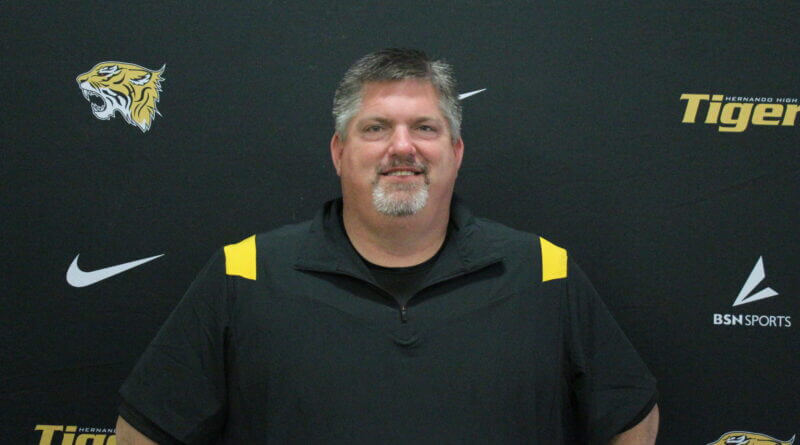 He’s been an assistant coach for 26 years, the last eight in charge of the defensive side as coordinator for the Hernando Tigers.

But Steve McCann now takes charge of the entire Tigers’ football program as its new head football coach. McCann was recently named the new coach after Will Wolfe took the offensive coordinator’s job at Oxford Lafayette.

“This is a great place to be a head coach at and there’s a bright future too, so it’s something special,” McCann told DeSoto County News recently.

McCann has had a background as an assistant at Morton, Brandon, Petal and a year at DeSoto Central before coming to Hernando, where he became defensive coordinator.

He says he’s primarily been coaching the defense during his career, outside of coaching some offense. He’ll be now overseeing the entire program, while letting his assistants be in charge of their respective areas.

“I’m sure I’ll still have a lot to say for input and interest in defense, too,” McCann said. ”We’ll get guys to do their job and have some responsibilities and let them coach too.”

McCann said he expects the Tigers to continue bringing out an offense that will offer a threat all over the football field.

“My vision of it is that we are still going to be an attacking offense,” McCann said.  In high school you have to coach to your players’ talents but we’ll still be a spread and attacking offense.”

Defensively, Hernando should also take what their best strengths are and use that to their advantage.

“We see what fits our guys best,” he said. “That’s the philosophy I’ve always had. We’ll have some more coaches in and see what their philosophies are and mix with the kids’ talent and what they bring to the table.”

Last year, Hernando finished with a 5-7 record, losing to Starkville in the first round of MHSAA 6A playoffs.  The Tigers reached the playoffs, even with a losing record, after winning four of its last five games, including a 27-26 win over Horn Lake. That was a win that pushed the Tigers over the Eagles into the postseason.

McCann said the returning players are ready to work and that work hasn’t stopped with the change in command.

“They seemed excited,” McCann said. “We haven’t skipped a beat since coach (Wolfe) stepped down. We’ve been getting after it and going. We’re getting ready for some dry weather and get our spring practice up and get organized. The effort and all that is still there.”

And the competition remains as stiff and challenging as ever in 6A football.

“It’s tough every week up here and that won’t change,” McCann said. “If you come out of this district, you’re going to go a good ways in the playoffs.”