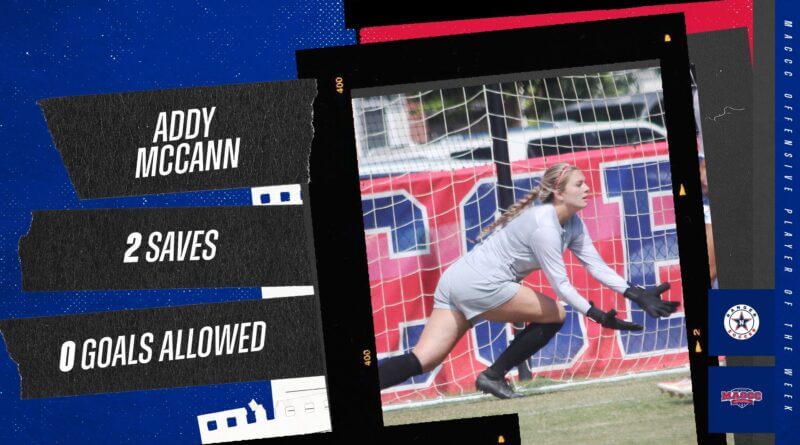 Northwest sophomore goalkeeper Addy McCann has been a steady defensive force for the sixth-ranked Lady Rangers throughout the season.

Her efforts were finally rewarded on Tuesday morning, as the MACCC announced McCann as the conference’s Goalkeeper of the Week, the first conference award for the Hernando native.

McCann only notched two saves in the Lady Rangers’ victory against No. 20 Copiah-Lincoln last Friday, but she posted her fourth shutout of the season and ran her individual record to 8-1-2 on the year. After seeing some action as a reserve last season, McCann has been the starter in all but one match this year, collecting 50 saves with only four goals allowed and a .926 save percentage.

Additionally, McCann continues to climb the program’s career record in total saves, as she currently sits at eighth overall with 88 saves entering Tuesday’s match against Meridian.

McCann is the first Northwest goalkeeper to earn the conference’s weekly honor since Maggie Olive did so on September 21 of last season, after posting seven saves with no goals surrendered in a 2-0 victory against Hinds.

Northwest will close out the regular season on Friday, Oct. 21 against Itawamba at 1 P.M. on the Senatobia campus. From there, the Lady Rangers will await word on their opponent in the MACCC Quarterfinals, scheduled for Saturday, Oct. 29.