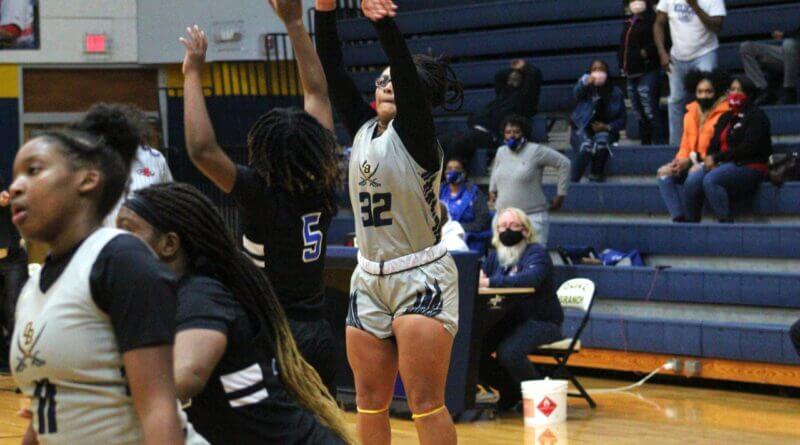 The number-one ranked team in MHSAA 6A Meridian Lady Wildcats came into Tuesday’s matchup with second-ranked Olive Branch with some verbosity and a swag attitude, seemingly forgetting the challenge that awaited them.

The last time Meridian lost a girls’ basketball game, after all, was the MHSAA 6A state semifinals last year, a 63-51 drubbing by Clinton at Mississippi Coliseum. They forgot the team they were to meet inside Charlie Bibbs Gymnasium in Olive Branch Tuesday went on to win the state title over Clinton just a few days later.

Regardless of ratings, Olive Branch was still the Queens of the Hill in Mississippi large school basketball and Tuesday night proved it.

Olive Branch coach Jason Thompson said his team took note of the excessive attitude Meridian brought to the floor and decided they needed to take care of business and be the ones to have something to cheer about when the game was over.

That “lunch bucket” response showed out with the Lady Quistors tagging Meridian with its first loss of the year in a convincing 66-55 victory.

“They really came out with a strong determination that they were going to win this game,” said Thompson about his team. “The girls started from the last couple of practices ahead of the game knowing what they (Meridian) thought of themselves and we knew what we thought about ourselves. I’m really proud of them.”

Olive Branch took charge immediately in the contest with a 20-10 lead after one quarter. Addison Howell hit a trey and totaled seven points for the quarter to lead the Lady Quistors, while teammate Brynea Eason added a three-pointer and totaled five points in the first eight minutes of the game.

The Lady Quistors took a 37-26 halftime lead as Rhema Pegues took charge for the home team, scoring 10 points in the second quarter for Olive Branch.

Charity Hinton kept Meridian within reach with eight points in the quarter and nine for the half.

Addison Howell scored 10 of her game-high 22 points in the second half and finished the night hitting nine of 10 from the free throw line.

“She (Howell) played a phenomenal game, especially from the free throw line,” Thompson said. “She really had her head into it tonight, concentrated and did an outstanding job.”

After Howell, Pegues finished with 15 points and Amya Black added 11 for Olive Branch.

Patton and Debreasha Powe each scored 19 to lead Meridian, but after that, there was no one contributing more than nine points.

“These ladies know how to win and they know how to play with each other,” Thompson said. “We’re continually building that chemistry and are trying to put ourselves in position for success.”