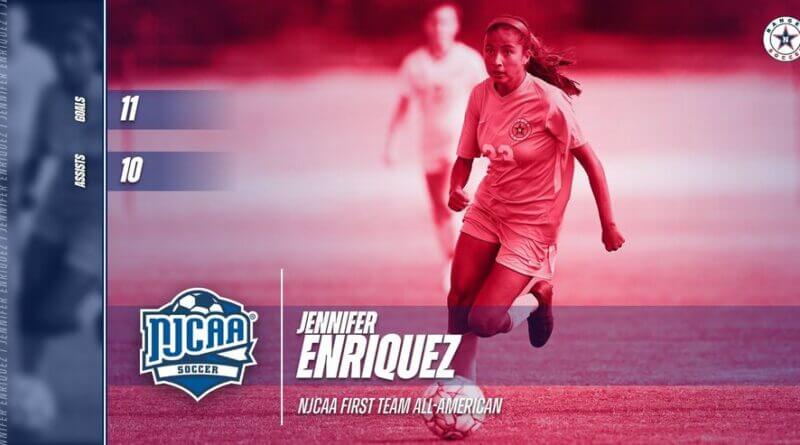 Though Northwest has had several student-athletes earn national academic honors by the NJCAA over recent years, Enriquez is the first Lady Ranger to garner All-American accolades from the NJCAA since Elyse Lovelace earned honorable mention recognition in 2006. The Las Cruces, N.M. native is also only the third All-American in program history, joining the aforementioned Lovelace and Gena Gutierrez, who also received honorable mention status in 2004.

Enriquez entered her sophomore season already the program’s single-season and career leader in assists, but was still snubbed from last year’s NJCAA All-American honors. This year, she further cemented her place at the top of the record books, closing out her Northwest career with 30 assists. Enriquez also leaves Northwest with 23 career goals, placing her tied for sixth all-time with Adrienne Whitson (2002-03) and M.J. Loeffel (2020-21). She also has 75 total points recorded over her two seasons, placing her fourth all-time in that category.

During the Lady Rangers’ run in the NJCAA Division II Women’s Soccer Championship earlier this month, Enriquez scored one goal and one assist, helping Northwest to the semifinals as one of the final four teams left standing. Her goal against Northeast (Neb.) was the first one of the match and helped kickstart a 4-1 victory for the Lady Rangers. Against Pima, her assist off a free kick found the foot of Melinda Hernandez, helping Northwest tie the match and force double overtime, where the Lady Rangers later scored the winning goal and advanced out of Pool D.

Northwest finished the 2022 season with a 15-2-3 overall mark, the second straight year with 15 victories, tying the program’s all-time high in wins for a single season. The Lady Rangers also advanced to the NJCAA Division II Women’s Soccer Championship tournament for the first time in program history, finishing as one of the final four teams left in the nation.