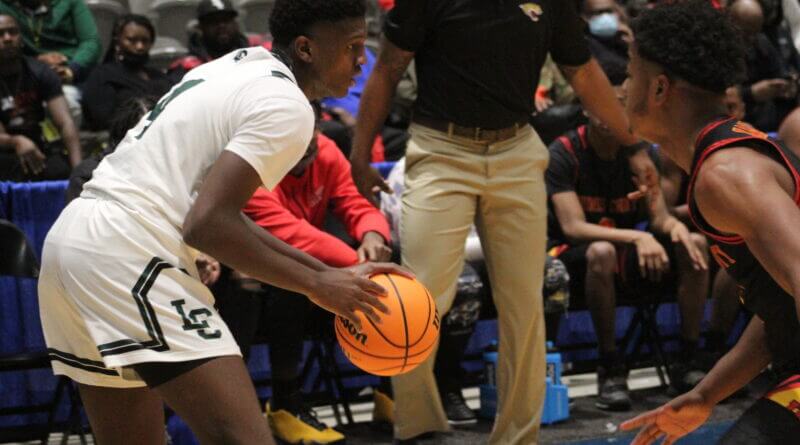 Photo: Keithean Brooks looks to go inside in the first half of Friday’s state 5A championship game in Jackson. (Bob Bakken/DeSoto County Sports)

Lake Cormorant’s first-ever appearance on the Big House floor at Mississippi Coliseum came up just short in the MHSAA 5A state championship game, as Holmes County Central claimed the title in a 64-58 battle on Friday night.

“My kids never gave up for 32 minutes,” said Lake Cormorant coach Bryant Worsham. “We got down 10 but we still came back. We fought and we battled.”

The teams found out quickly what a night it was going to be, as Lake Cormorant led by 9-6 and 11-8 before the Jaguars were able to take a 12-11 lead at the quarter’s end.

The Gators recovered and knotted the contest at 25-25 going into the locker room at halftime.

Malik Criger led Holmes Central with eight in the first half.

Foul trouble was going to be an issue the entire night and started when Damian McKnight picked up three fouls in the first half with the third one coming with 5:40 remaining before halftime.

The third quarter tilted the game in the Jaguars’ favor. as Lake Cormorant had trouble competing with Holmes Central on the boards, and the Jaguars finished the quarter with a 12-point lead at 49-37.

“McKnight and (Marshall) Odum picked up big fouls and we were struggling to keep them off the glass as it is, and when your two leading rebounders go out, you’re in trouble,” said Worsham.

The Jaguars had fashioned a 14-point lead in the fourth quarter at 53-39, but that’s when the Gators started a late comeback. A six-point run got Lake Cormorant within 53-45 before the Jaguars hit a basket. The Gators came back again and got within six and finally within two points at 60-58 in the final minute of the game.

But, four straight free throws on a foul by Donovan Sanders, who thought he was tripped on a drive, followed by a technical foul fashioned the final score and the state title for Holmes County Central., the school’s first-ever championship.

For the game, Brooks and Sanders each scored 17 for the Gators, who finished the season with a record of 20-8.

“We had trouble keeping them (Holmes) off the glass,” Worsham said.

TOURNAMENT ETC.: Lake Cormorant forward Keithean “KB” Brooks is part of the Mississippi roster for the annual Mississippi/Alabama All-Star on Friday, March 12 at the Multiplex at Cramton Bowl in Montgomery, Alabama. Brooks is the only DeSoto County player on the boys’ all-star roster to play against counterparts from Alabama in the annual game.