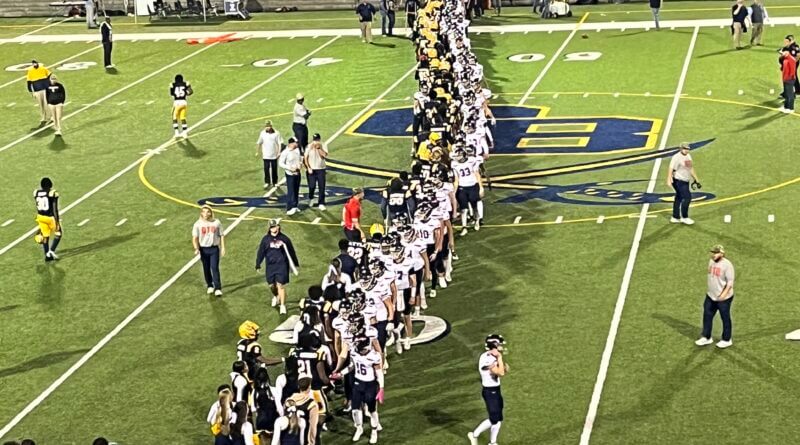 Lewisburg 28, Olive Branch 14:  The Patriots kept their 6A playoff hopes alive with Friday’s victory over the Conquistadors at Olive Branch. Quarterback Gunnar Gilmore ran for two touchdowns and threw for another to help the Patriots to a 5-4 overall record and 3-3 in Region 1-6A.

After Flip Sanders scored a 14-yard touchdown early in the first quarter, Coleman Dowell tied the game with a 13-yard scoring run with under eight minutes left in the first half. Lewisburg recovered a fumble on the ensuing kickoff and Gilmore scored his first touchdown of the game on a one-yard carry just a minute and a half later.

Another short-yardage run by Gilmore with 2:20 left in the third quarter gave Lewisburg a 21-7 lead and the Patriots started to put the game away with Gilmore’s 28-yard pass play to Lucas Gaschk for a touchdown with 3:29 left in the contest.

Olive Branch did score late, a 52-yard strike from Raheem Vance to Ethan Bobo with 1:16 left, but an onside kick attempt failed to get the Quistors the ball back and Lewisburg ran the clock out for the victory.

The Patriots play DeSoto Central Thursday in their next contest, while Olive Branch hosts Hernando to wrap the season.

Southaven 35, DeSoto Central 6: Unbeaten Southaven (9-0) wins the Region 1-6A championship and is assured of a home game for the first round when the postseason begins Nov. 11. DeSoto Central falls to 5-5 and 3-3 in region play.

Columbus 15, Lake Cormorant 14: A fourth-quarter touchdown followed by a two-point conversion provided the Falcons with the victory that may have killed the Gators’ hopes for the 5A playoffs. Dalton Raines scored one of the two Gator touchdowns in the loss and Cordarrius Bullock scored the other.

South Panola 49, Horn Lake 14: South Panola took a 35-0 lead while streaking off to the victory.  Horn Lake remains winless for the season ahead of the season finale Thursday against Southaven.

Hernando 28, Center Hill 21: Hernando got a 70-yard passing touchdown to Brody Martin, who also scored on a one-yard keeper to get the Tigers ahead 21-7 at the time.

Lausanne Collegiate 38, Northpoint Christian 6:  The Trojans fall to 6-4 with the home loss to the Lynx, but will still host a TSSAA Division II-AA playoff game next Friday, the opponent still to be determined.  Northpoint scored first in the opening minutes of the game but Lausanne scored 38 unanswered points from there for the win.