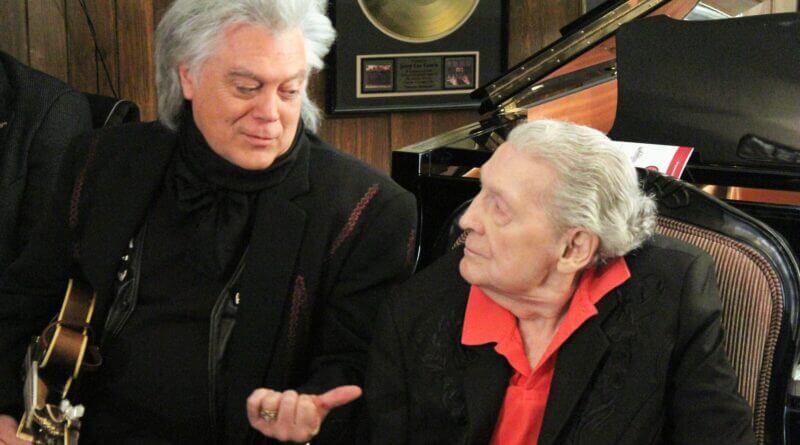 Photo: Marty Stuart and Jerry Lee Lewis chat at the Lewis Ranch in Nesbit when the home was given a Mississippi Country Music Trail marker. (Bob Bakken file photo)

There’s one person in DeSoto County who had a unique vantage point on the life of Rock and Roll and Country Music legend Jerry Lee Lewis, who passed away Friday at the age of 87.

“The first time I went to work for him, I came home all excited because I flew in a Lear jet for the first time, rode in a limo, met Chubby Checker and Wolfman Jack,” Lee said. “I thought that was something I would never, ever do. I think he paid me $200 and I thought that was unreal. The next week they called me and wanted to know if I could do it again because Jerry liked me.”

Lee went to work for Lewis for 17 years, first as his personal bodyguard and then as a road manager.

Born in Ferriday, Louisiana, Lewis would become one of the last originators of rock, with a generational group that included Elvis Presley, Carl Perkins, and Johnny Cash, the group that eventually became known as the Million Dollar Quartet for their private music session at Memphis’ Sun Records. He would settle and lived at his home on Malone Road in Nesbit, known as the Lewis Ranch.

While Lewis’ life was tattered with addictions and personal and relational issues, the piano-banging, give it all you got performer was also known for producing several great hits, such as Whole Lotta Shakin’ Goin’ On, Great Balls of Fire, and who became known as “The Killer,”

Of the many awards Lewis won, his last, an induction into the Country Music Hall of Fame, came just before his passing. Too ill to travel to Nashville to attend the ceremony, he sent a letter that was read during the induction by Hank Williams Jr. The award was then personally presented to him by Kris Kristofferson.

During the 1970s, Lewis won an Academy of Country Music award for keyboard/piano. He was given a Grammy Lifetime Achievement Award in 2005, and has his star on the Hollywood Walk of Fame.

Three years ago, Lewis was presented with a Mississippi Country Music Trail marker at the Lewis Ranch by former Gov. Phil Bryant and entertainer Marty Stuart.

Lewis’ health had been failing in recent months, however, and in the obituary story posted on his website, wife Judith admitted Jerry Lee saying he was ready to pass on.

“I talked to him Tuesday when he was in the hospital over in Olive Branch and he was talking then, but a couple of days later he fell into a coma,” Michael Lee said. “He had a good life.”

Lewis himself added in his 2014 biography, “I’ve had an interesting life, haven’t I?”

Arrangements are still to be announced, but according to his website, the family requests donations in his honor be made to the Arthritis Foundation or MusiCares – the non-profit foundation of the GRAMMYs / National Academy of Recording Arts and Sciences.

UPDATE: Sunday, the Jerry Lee Lewis Facebook page posted the following photo, starting all services would be open to the public as space allows. “Jerry Lee Lewis loved his fans and we want them to be able to celebrate his life with us,” the post read.