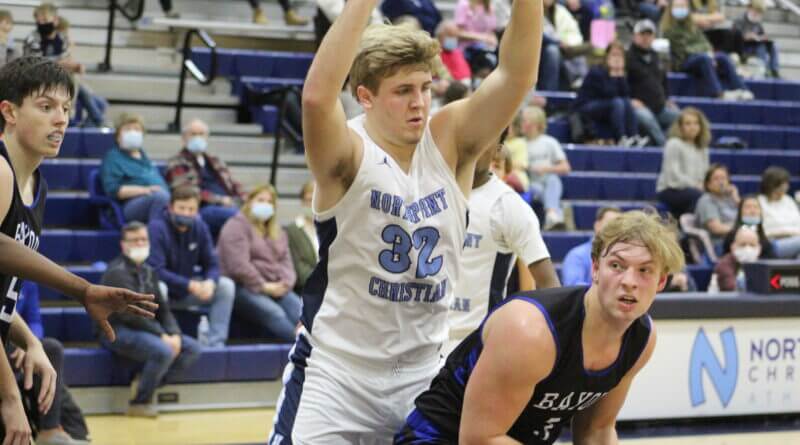 Fans at Manley Court on the Northpoint Christian School campus were able to see their boys’ basketball team wrap up the home regular season with a convincing 64-29 victory over a Bayou Academy squad that came into Southaven with an impressive 20-5 record.

Northpoint scoring leaders in the win were Christian Gilliland with 18 points, Mitchell Wright had 15, and Darius Naylor ended up with 12, including a pair of third-quarter three-pointers.

Northpoint roared out to a 19-0 lead after one quarter and Bayou Academy finally got its first points on the scoreboard 11 seconds into the second quarter.

Gilliland had the hot hand for the Trojans in the first half, scoring 12 of his 18 points before halftime.

The Colts did recover in the second frame and cut the margin to 26-14 for the Trojans at halftime, as Northpoint was held to just seven points in the second eight-minute period.

The Trojans gathered themselves coming out of the locker room after halftime and forged a 41-21 advantage going into the final quarter of play. Northpoint tallied 15 in the quarter and held the Colts to just seven points.

Northpoint put the game away in the final quarter, outscoring Bayou Academy 23-8 for the final outcome, part of a 38-point second half for the Trojans.

Jack Cartwright paced the Colts with 11 points in the loss. Cartwright knocked down a pair of treys in the second quarter as part of his point production.

You’d likely have to go back to late December to find the last night a Northpoint Christian School girls’ basketball game result had an “L” next to it.

The Lady Trojans have been rolling and it continued with Friday’s non-conference 54-22 victory over Bayou Academy.

Northpoint held a 13-4 advantage after one quarter with Leah Jones and Brylee Faith Cherry each scoring six points.

The Cherry-Jones combination continued in the second quarter with Jones’ nine points in the quarter and Cherry’s eight markers helping the Lady Trojans to a 28-point period and a 41-11 halftime lead.  Bethany Wright stepped in to add six points of her own in the second-quarter point eruption.

A low-scoring third quarter put the Lady Trojans ahead 51-16 heading into the final quarter, which was played with a running clock.

Jones was the top scorer for Northpoint Christian with 21 points, Cherry scored 14, and Bethany Wright finished with eight. Tate Rogers was Bayou Academy’s leading scorer with 11, including a pair of three-pointers as part of a nine-point second half. Katy Clark added seven, all in the first half.

Both Northpoint Christian School teams have afternoon contests at St. Benedict at Auburndale Saturday, and a couple more regular-season road contests coming in the week ahead. Depending on seeding, Northpoint could be starting TSSAA Division II-A tournament as early as the following Saturday.