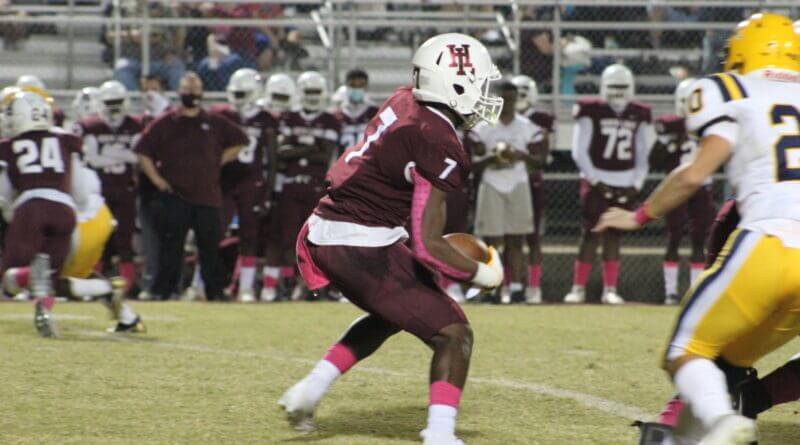 The Horn Lake Eagle football program is building a legacy of success after winning a MHSAA 6A state championship in 2018 and finishing 15-0, with several head coaches having been groomed in this program, and the 2020 graduating class alone having at least ten players sign to play football on the collegiate level.

In his second year as head coach, coach Mitchell Harville is looking to continue the program’s success after a 5-5 2020 season. Despite the record, however, the Eagles did fight their way into the playoffs in 2020, losing to Clinton in the first round, and they finished district play with a record of 5-2.

The Eagles have made it to the playoffs four years in row now, and Harville has been in and around the program for 15 years. He has a number of key starters on offense returning this season in almost every position. Trint Conder will again lead the team as quarterback, and several other seniors look to be leaders under the lights on Friday nights including Rashard Daniels, Dyllon Bullard, Phil Oliver, Lavante’ Hodges, and Jamal Moore. And of course, Jarnorris Hopson is sure to move the ball all over the field this season as well.

Juniors Rondarius “Bam” White and Trevor Walton are also looking to step up and lead the Eagles this year, especially in fights against teams such as Lake Cormorant in the annual Lake Bowl and Southaven, Horn Lake’s historic rival, who they only beat by a touchdown last season.

In the 2020 season, Lake Cormorant beat the Eagles in Horn Lake 31-21, and Horn Lake will have to fight for the Lake Bowl trophy in the Swamp this season.

The defense lost five starters from last season, and there are a few freshmen players eyeing their chance to contribute to the Friday night fight each week. Coach Harville did point out that this summer was the first summer practice for some of his sophomore players after possibly being virtual students last summer.

While Harville does have a number of players with experience lining up on the gridiron, there are a number of spots being filled by players with no game-time, starting experience. Whether experienced or not, Harville’s message to his team is simple, “Be fast and be physical on both sides of the ball.”

Horn Lake will begin their regular season in Grenada on Aug. 27, and the Eagles will be on the road for most of the season. Only four home games will be played at Horn Lake, including matchups against Lafayette (Oxford), Lewisburg, Center Hill, and South Panola. The Eagles lost against Lafayette in the first game of the season last year, but beat Lewisburg in a decisive victory 41-13. But, the Lewisburg Patriots did hire former Horn Lake assistant coach Dustin Hectorne as their new head coach, so this matchup could have a different energy and mindset this season.

Center Hill and South Panola are new this season to district play, though South Panola and Horn Lake have played one another countless times.

On the road, notable matchups include Olive Branch, which is the “team to watch” according to Harville, and Hernando, who earned a spot in post-season play last season. Either way, Horn Lake will not have to leave DeSoto County to play district games this season.

The Eagles hope that being fast and being physical will lead them to being victorious on Friday nights this fall.