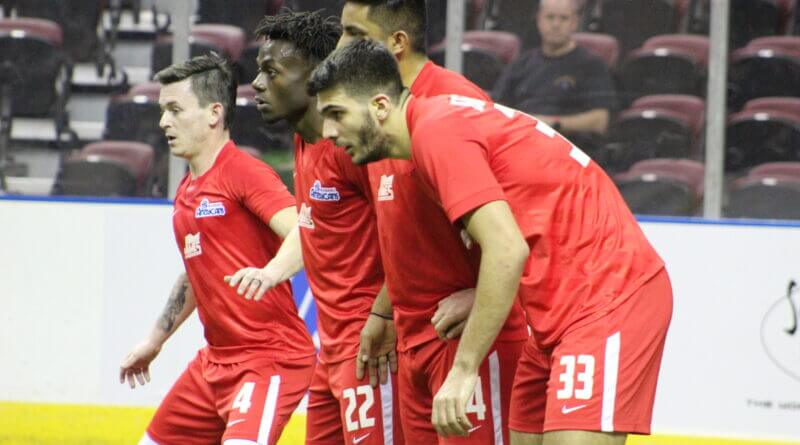 The Memphis Americans took a pair of games from rival Fayetteville Fury Sunday afternoon at the Landers Center in Southaven. A goal from Djordje Djordjevic with 1:30 left in the fourth quarter broke a 6-6 tie and gave the Americans men’s team a 7-6 victory in an intensively contested soccer match.

Meanwhile, the Americans women’s team easily handled Fayetteville 7-3, as Kelsey Keown and Bailey Tadlock each scored a pair of goals for Memphis in the victory.

In the men’s match, Fayetteville took a 2-0 lead in the first quarter on goals from Fernando Castellanos and Alex Hernandez, but Memphis scored three times in the second quarter to tie the game at 3-3 at halftime. Corey Adamson, Paulo Ndenzako, and Bernardo Ferriera found the back of the net for the Americans, while William Marenco answered for the Fury.

Fayetteville came out of halftime to score two straight goals before Adamson would net his second goal of the game to get the Americans within 5-4 with 8:59 left in the quarter.

Cameron Steele gave Fayetteville a two-goal cushion with a goal at 11:15 of the fourth quarter, but it was all Memphis from there. Ronald Akinsehinwa scored at 10:26, Mike Scharf would tie the match with 7:38 remaining, followed by Djordjevic’s late heroics with 1:36 remaining for the winning tally.

The goal by Djordjevic was his 17th of the season and gave him the number one star for the night. Adamson was named the number two star.

Memphis outshot Fayetteville 18-13 for the match. Piotr Sliwa and the Fury’s Kenneth Parkinson each made five saves.

Despite the win, Memphis remains a half-game behind Fayetteville for the top spot in the National Indoor Soccer League men’s standings with an 8-4-0 record. The Fury fell to 8-3-0 for the season.

In the women’s match, it was all Memphis in the early going, as Tadlock and Lauren Odino-Draughon scored in the first 8:01 of the contest. Maddie Capel of Fayetteville answered to get the Fury within one at 2-1 at the end of the first quarter.

From there, the Americans broke the game wide open with five consecutive goals through the rest of the second quarter and into the third quarter of play. Tadlock netted her second of the night, Tanya Crehan and Keown made the halftime score 5-1 Memphis. Keown opened the second half scoring with a goal in the third quarter and Brunia Leiria finished the run with a score at 1:26 remaining mark of the period.

Fayetteville got two fourth-quarter goals from Kate Weisner to complete the scoresheet for the contest.

Memphis outshot the Fury by an astounding 32-7 margin in the victory. The Americans’ Angel Hailey made four saves on seven shot attempts and Fayetteville’s Mayar Elgeyoshi was credited with 15 saves on 21 shot attempts before she was replaced by Sam Rubio to start the fourth quarter.

Adamson, who coaches both men’s and women’s teams, said after the contests the victories were important for his teams to rebound from one-goal losses two night prior in Columbus, Georgia. On Friday, the Rapids defeated the Americans men’s team 3-2 and the Columbus women stopped the Americans women’s squad 3-2 in overtime.

The Memphis women are now firmly in front of the league standings with a 10-2-0 record while the Fury fell to 1-10-0 with the loss. The Rome Gladiators, which have played only five games this year, are in second place with a 4-1-0 record. The Columbus women are third in the NISL race at 4-6-0.

Sunday’s game featured a ticket giveaway to get more fans exposed to the indoor soccer game. Between 1,500-2,000 fans came to the Landers Center, through either ticket purchases or the giveaway, where fans could get up to six free tickets for the contests. Some 5,800 vouchers were reportedly claimed ahead of kickoff Sunday afternoon.

Memphis Americans co-owner and president Andrew Haines pushed the promotion through his sports marketing company HSE Agency, which covered the free tickets. HSE Agency is also involved in the ownership of the Fayetteville Fury.

Haines and Michael Taylor co-own both franchises in the fledgling indoor soccer league. Front office staffer Chris Lorenzo is listed on both teams’ websites and Brian Roth is special consultant to the executive board of both franchises.