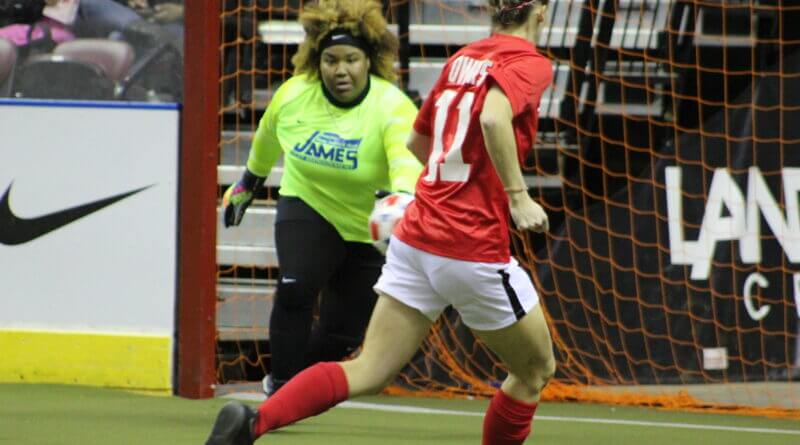 Photo: Memphis Americans goalkeeper Angel Hailey eyes another save during a match this season at the Landers Center. (Bob Bakken/DeSoto County Sports)

Southaven native Angel Hailey Friday was named the National Indoor Soccer League’s women’s Goalkeeper of the Year by the league.

Hailey led the NISL in all major categories with 15 wins, .849 save percentage, 2.3 goals against average, and 3 shutouts.  Hailey recorded the first shutout in NISL history on February 6th against the Fayetteville Fury.  However, perhaps her best performance came against the Rome Gladiators, where she made 19 saves in the Americans’ 5-4 victory on December 30th in front of the home crowd at Landers Center.

Angel, a Southaven native and Southaven High alum, played at Northwest Mississippi Community College completed her collegiate career at The University of Montevallo before joining the Americans by way of open tryouts.

“Angel is truly one of the most wonderful people and competitors I have ever met,” head coach Corey Adamson said.  “Her drive to prove herself and win is only seconded by her love of the game and her teammates.  She’s the backbone of our team.”

“It is both an honor and a blessing to be named goalkeeper of the year,” Hailey said. “One of my personal goals was to become the league’s best goalkeeper, with the most shutouts, the fewest goals allowed, and the highest save percentage. Now that I’ve accomplished those goals, I’m looking forward to breaking my own record next season. I’d like to thank Coach Corey, my teammates, all of my supporters, and the Memphis Americans organization for giving me this opportunity. I couldn’t have done it without their continuous encouragement.”