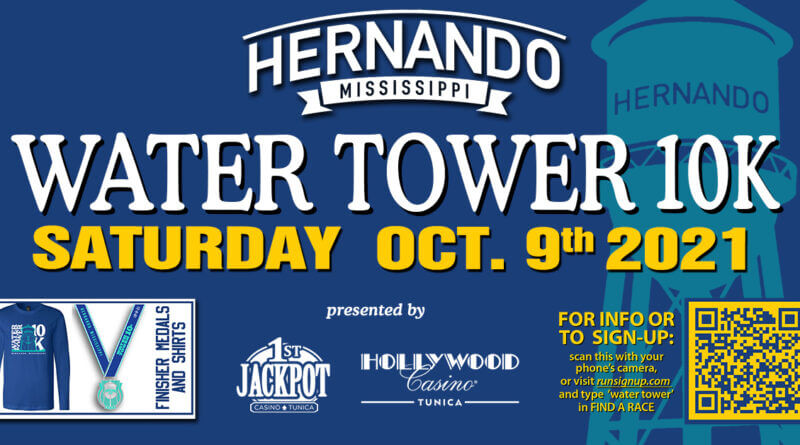 Hernando elected city officials have been provided with details about this year’s Water Tower 10K race event, held in early October, its participation and impact on the city’s Excel By 5 literacy program through the Dolly Parton Imagination Library.

According to Gia Matheny, Community Development Director for the City of Hernando and race director, this year’s event had 502 registered runners. That was an increase of 12 percent over last year’s event.

Participants came from 11 states and 56 cities with 213 Hernando residents supporting this sports tourism event. Businesses on the square reported more shoppers in stores from the race, Mathney said, and more than $17,000 in funds were raised this year for the city’s Dolly Parton Imagination Library (DPIL).

Matheny said approximately 500 children in the city limits are enrolled and receive an age-appropriate book each month which costs $15,000-$16,000 annually and is paid for by the Water Tower 10K fund at the Community Foundation of Northwest Mississippi.

All funds for the books are raised by this race, through grants and by donors who support our efforts to improve early literacy.

A grant was most recently applied for with Atmos Energy to help fund the books, resulting in a $10,000 award to assist in Hernando’s efforts.

Hernando Excel By 5 works closely with the DeSoto County Schools Board of Education and Hernando Elementary is the only school in the district that has a question on the kindergarten reading assessment asking if the child is enrolled in the DPIL.  Those children who are identified as receiving the books have reported higher reading levels than those not enrolled on the assessment test.

“This has been a fantastic program and the city frequently receives positive feedback from our young families whose children are enrolled,” Matheny said. “In Hernando since 2015, each child receives an age-appropriate book from the time they are enrolled until their fifth birthday. Our Excel By 5 coalition works closely with Baptist and Methodist Hospitals to get the registration forms to new moms so the child can start receiving books once they are born.

Matheny added that Horn Lake is the other city to have the program north of Oxford in Mississippi.