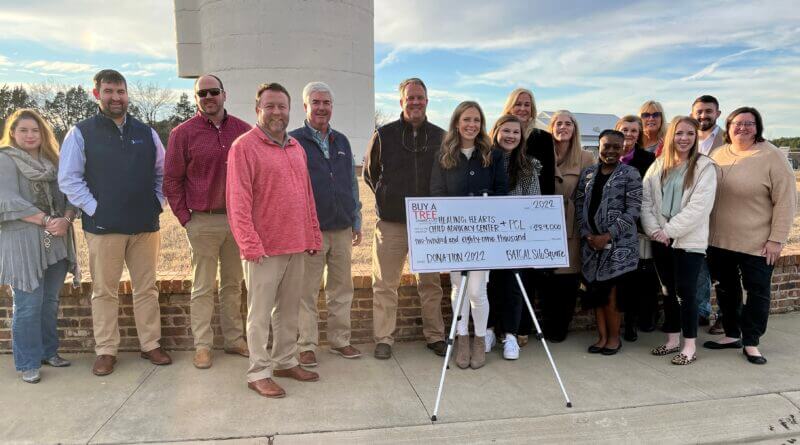 The development along Getwell Road in Southaven has hosted the local part of what’s become a nearly national drive to help children, both locally and globally.

Monday’s announcement, held in front of the iconic Silo Square silo, revealed the 2022  fundraiser raised $289,000, nearly $40,000 more than the first year effort in 2021.  Half of the money raised through the tree sales and other donations goes to the Healing Hearts Child Advocacy Center, which provides advocacy services to victims of child abuse in DeSoto and Tate counties.

“We are thrilled with this our second year being involved and we hope it is an ongoing thing,” said Healing Hearts CAC Executive Director Sally Williams. “This helps us so much to supplement the funds that we need. It was such an amazing turnout this year. We want everybody to return next year.”

In 2021, in the first year Silo Square held the local fundraiser, $250,000 were raised in selling Christmas trees at a tent set up near the development’s Bell Tower. At the time, the amount was significant in DeSoto County and considered to be a record amount for “Buy A Tree.”

“Corporate sponsorships are such a huge part of this,” Hill said. “We are very proud to be a part of it and are very thankful.”

“Buy a Tree, Change a Life” is part of a non-profit organization that was started in Florida in 2012 to raise money to adopt a child from Ethiopia by a local church.

This past Christmas season, there were 68 locations in 21 states holding tree sales. Half of the funds raised goes to Buy a Tree for global child assistance and the other half goes to help children locally.

Silo Square is one of two Mississippi sites for Buy A Tree. Magee, Mississippi’s Waco Church of God is the other.