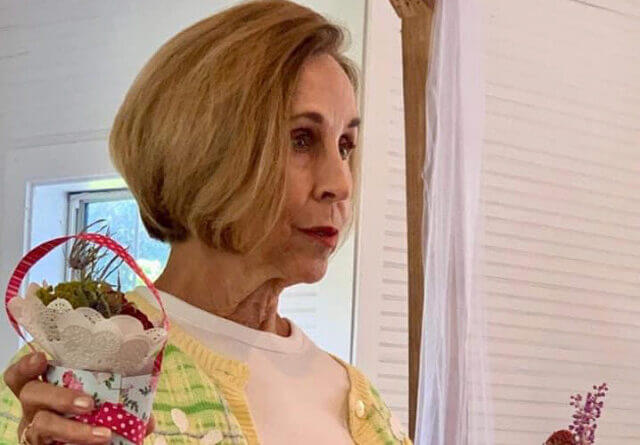 During the September meeting of the DeSoto Civic Garden Club which was held at historic McDonald Chapel in Hernando, club member Amye Kelly demonstrated to fellow garden club members the art of using fresh and dried flowers in the construction of nosegays, or tussie-mussies.  These small hand held floral bouquets called nosegays or tussie-mussies date back to medieval times, when  women carried these fragrant bouquets as a way to help mask the stench of the streets.  The name tussie-mussie comes from a 15th century rhyme in which tussie means a cluster of flowers and mussie the moss that wrapped the flower stems.

In the Victorian Age, the period from 1837 to 1901 named for the reign of Queen Victoria, tussie-mussies were tightly packed with flowers, herbs, and foliage.  A lacy dolly or bouquet paper often surrounded the arrangement.  The stems were wired to a slender twig for support and covered with damp moss. The bouquet was then placed in a posy holder or wrapped with ribbon and held in a handkerchief.  By the 19th century, wearing fresh flowers had become an important element of fashion, but the custom had disappeared by 1900.  Today the tussie-mussie survives as a popular wedding accessory with British royalty such as Kate Middleton who chose to carry a bridal bouquet in the style of a tussie-mussie.

At the close of the September meeting, garden club members were given access to handouts via email by Amye which included directions for constructing their arrangement, as well as types of flowers that would complement their own tussie-mussie.  Each member was asked to complete at least three tussie-mussies which will be used to decorate a Christmas tree at the DeSoto County Museum in December.