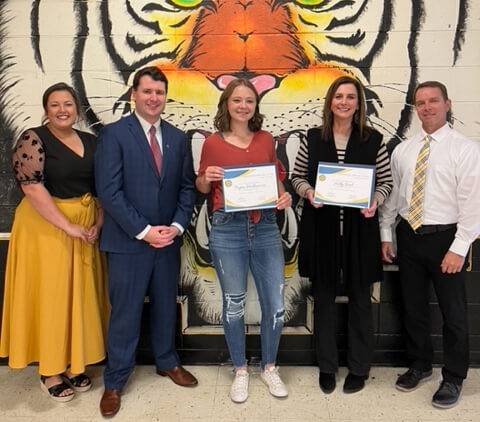 The Hernando Rotary Club recently presented its Student and Teacher of the Month award to student Peyton Williamson and teacher Holly Neel.

The following information was provided by the Hernando Rotary Club:

“One of the school organizations that she is most proud to serve in is the Fellowship of Christian Athletes. Before starting her senior year, she was asked to be president of the organization, and she gratefully accepted.

“Peyton is proud of the work that FCA does both in and out of school. FCA not only shares the Gospel with students but trains them to go out and also make disciples. FCA offers many opportunities to students to fellowship with other believers and to grow in their faith through discipleship. This is an organization she is so proud to serve, one that has, not just a lasting impact, but an eternal one. While she is at Hernando High School and blessed with this leadership platform, she hopes and prays she will use it to point others to their Creator.

“Also during her time at Hernando High School, Peyton has been given the opportunity to be captain of the Lady Tigers Soccer Team. She has learned so much through this experience and says “Leadership is not simply telling others what to do. Leadership requires service and putting others above yourself.” For Peyton, this has looked like cleaning a sweaty, grimy locker room and staying later to work on a skill with another player.

“After she graduates in May, she plans on attending Mississippi College in Clinton, where she will continue her education pursuing a career in pediatric medicine.”

Holly Neel is originally from Alabama, where she graduated from the University of West Alabama with a degree in Languages and Literature. She and her husband, Nick, moved to Memphis in 1997 when husband Nick got a job at FedEx.  Neel worked at the University of Memphis for their distance learning program in conjunction with the National Fire Academy helping firemen get their bachelor’s degrees.  After her daughter was born, she decided to stay home with her for 8 years. They moved to Hernando in 2002 and Holly started teaching in 2007.  She was at Southaven High School for four years where she taught seniors, 9th grade and 10th grade English. She came to Hernando High School in 2011 where she’s been teaching accelerated English 10 ever since. She also teaches PSAT and has sponsored the class of 2014, 2017, and 2020. She sponsored Chick-fil-A Leader Academy for 5 years and the Interact club for the last 11 years.

Interact has sponsored many autism awareness events and several fundraisers for Arc of Northwest Mississippi. Every year, they try to hold food drives for the interfaith food pantry and participate in the angel tree Christmas program. Before COVID-19, they participated in many projects at Wesley Meadows and the elementary schools in town, and they certainly hope to get back to that this year.