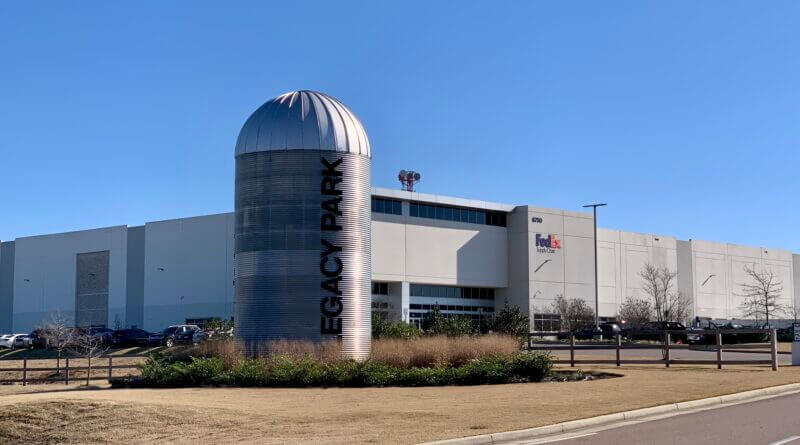 Photo: The entrance to Legacy Park on state Highway 302 in Olive Branch. Property to the south was being considered for zoning changes Tuesday night. (Bob Bakken/DeSoto County News)

At issue were two tracts of land, one labeled the North Tract and the other labeled as the South Tract, both located south of the current center. The application was for the tracts, currently zoned Planned Unit Development, or PUD, to both be changed to M-1, or Light Industrial District. The North Tract consists of about 138 acres south of state Highway 302 on the east side of Polk Lane and adjacent to Progress Way. The south boundary has several transmission line easements.

The South Tract that was also considered Tuesday night is about 84 acres bordered by the transmission line easements on the north and the planned easterly extension of Nail Road on the south.

The application is at issue because in its original form, the land was under DeSoto County jurisdictions until it was part of last May’s annexation by the City of Olive Branch.

County officials, represented Tuesday night by Supervisor Jessie Medlin, had sought to hold back expansion of the center for the benefit of nearby residents and keep distance between them and the complex, which includes an Amazon warehouse facility. Medlin represents District 1, which includes the area where the land is located.

“What we’re trying to do is build three miles and connect Hacks Cross Road and Center Hill Road for residential traffic, school traffic, buses and stuff,” Medlin said. “I’m afraid that if this industry goes in, the trucks are going to want to use Nail Road. The PUD is the right zoning for this property.”

Other concerns about traffic problems were brought up in the public comment portion of the discussion, including huge trucks and expected increase of vehicle traffic if the logistics park is allowed to expand.

Clayton Watson, a commercial real estate broker who said he represents two clients who have over 200 acres south of the South Tract being considered, said those clients are opposed to the warehouses and urged the commission to deny both applications.

“Hillwood has been probably the best developer that I work for,” Hatcher said. “The areas of Legacy Park that we did work on were landscaped according to city recommendations, requirements, tree sizes and those areas are 100 percent irrigated and sodded.”