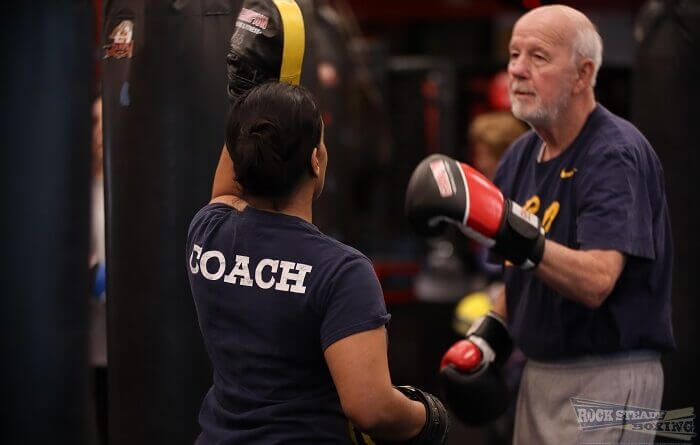 A new exercise program adapted for people with Parkinson’s disease is being introduced to DeSoto County in the coming weeks.

The program is called Rock Steady Boxing and it involves regular exercises, such as stretching, bicycling, running, jump-roping, push-ups, balancing and lots of non-contact boxing, led by experienced trainers/coaches.  Rock Steady Boxing serves both men and women of all ages and levels of ability.

April Carpenter of Faith Inspired Training in Southaven recently completed the certification training for the Rock Steady Boxing program and said Southaven is fortunate to have the program. A similar program is underway in Cordova, Tennessee.

“The fitness industry is moving toward medically directed fitness,” Carpenter said. “This is our first step in that direction.”

The program is non-contact, Carpenter said, but added that, “it’s taking the Parkinson’s symptoms and giving them exercises to keep those symptoms at bay.”

For instance, a boxing jab helps control tremors a Parkinson’s patient may have, she said.

Rock Steady Boxing has been in existence the past 10 years and there are more than 815 affiliate programs around the world.

“We have always believed in the Rock Steady Boxing method,” said Rock Steady Boxing, Inc. Executive Director Joyce Johnson.  “When evidence began to emerge that our program had a positive impact on the ‘boxers’, our mission became clear — to share our knowledge and experience with all people with Parkinson’s.  That is why we decided to make our training available worldwide.”

An open house for those interested will take place on Wed., Oct. 19 from 12 noon- 3 p.m. and classes will start on Nov. 7 at Faith Inspired Training, 3964 Goodman Road East in Southaven.