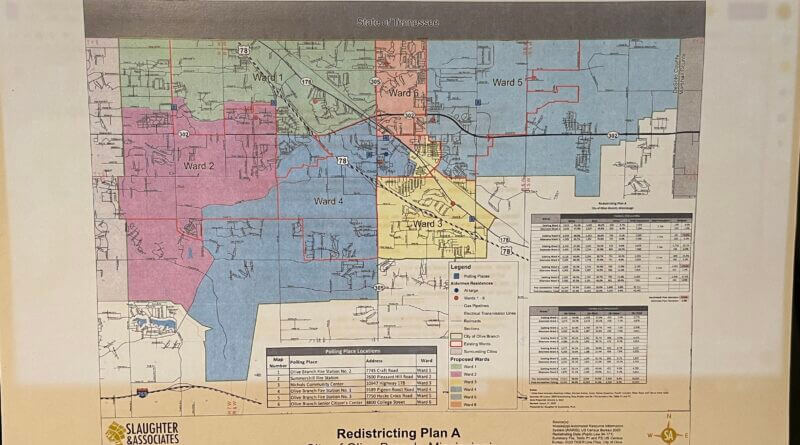 Final ward boundaries could be approved on June 7

Olive Branch city officials are closer to finalizing its new ward boundaries and a decision could come at the June 7 Board of Aldermen meeting to approve the new boundaries presented by Slaughter and Associates senior planner Richard Donovan Jr. at Tuesday evening’s board meeting.  Slaughter and Associates is an urban planning consultant business that deals in voting district redistricting, among its areas of expertise.

Donovan pointed out two obvious challenges in setting forward new boundary lines for the city wards. They are population growth from traditional attraction and from the recent annexation of areas to the south and east of the old boundaries.

“The city has two large annexation areas that were definitely a different challenge than most redistricting,” Donovan said. “You’re basically adding 7,000 from growth and 7,000 from annexation, so they both created some challenges.”

Donovan presented the new maps in a presentation and copies of the proposed maps were made available at the Board of Aldermen meeting.

Racial diversity, population equity, and avoiding the displacement from current aldermen from their wards were other pieces in putting the redistricting puzzle together.

“One thing that we wanted to do was to make sure we preserve the racial diversity within a ward and make sure that we don’t affect a minority in a negative manner,” Donovan pointed out. “We’re not here to move aldermen out of their ward. That’s not our job or goal.”

The redistricting Plan A, as it was called,” also came about’ with “a couple of work sessions” with city officials, Donovan said.

OB AIRPORT KEPT BUSY:  In his Mayor’s Report, Mayor Ken Adams talked about the growth in activity at the Olive Branch Airport, which saw April figures higher than for any month since statistics were first available in 2005.

The mayor also talked about the need for more hangar space at the airport. Adams said the airport now has 60 hangars, but there are 93 pilots and companies that are on a waiting list for hangar space.

The city wasn’t successful in getting state funding for new hangars in the 2022 Legislative session, however Lt. Gov. Delbert Hosemann intimated the city and state could partner later in the year for a 50/50 match in funding. Adams has asked the Board of Aldermen to be considering that option, which may come before them at a later meeting.

In the month of April, there were 6,853 calls into city dispatch for response by first responders, public works and the animal shelter.  Of that number, 2,237 were for police response, 466 were for fire response, and 392 were ambulance calls.