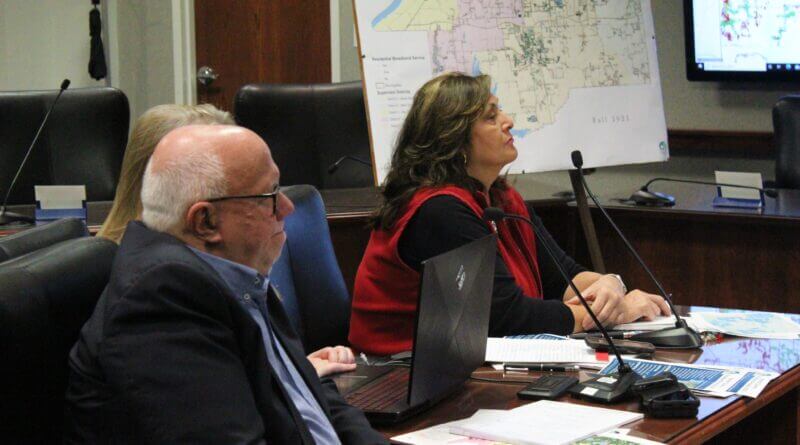 The availability of having high-speed internet into a home today is akin to having electricity. It is no longer something extra just to have available. Broadband service is very much a necessity to function in today’s society and lifestyle. The need for high-speed internet became even more important in the past two years since the coronavirus pandemic appeared. People were forced to work from home, study at home, and even shop at home to avoid personal contact with others.

Thursday morning Presley addressed the issue with DeSoto County Supervisors, legislators, and representatives of the three major service providers in the county. Northcentral Connect and CSpire had people at the County Administrative Building boardroom and an Entergy representative took part via video hookup.

Others in attendance were Supervisors Board President Mark Gardner and Supervisor Lee Caldwell, along with state Reps. Jerry Darnell (R-Hernando) and Hester Jackson-McCray (D-Horn Lake).

Presley acknowledged getting the entire county hooked up to broadband may take what he called a “Heinz 57 approach” with all of the service providers working together. But Presley stressed the importance of moving forward to get underserved households hooked up.

“It’s important for the future of the children of DeSoto County and for DeSoto County to continue to grow,” Presley said. “Nobody is going to move anywhere that they can’t get broadband service. Nobody wants to buy a house that doesn’t have broadband service like they don’t want to buy a house that doesn’t have electricity.  They want to be able to have that service affordable and reliable.”

Northcentral Connect and C Spire have already made moves into offering their services to providers. Northcentral Connect, in fact, is in the process of laying fiber down and hooking up members, and adjacent nonmembers, to its service. C Spire also is offering improved services for high-speed internet that include Gig speed fiber.

Presley has asked Entergy to also get involved and in the next 30 days come up with cost information and more concrete plans on how it could extend the internet’s reach for their customers in DeSoto County.

A recent broadband analysis was done by DeSoto County Government to respond to the Federal Communications Commission’s belief that everyone in the county had internet access.

During the months of June, July, and August, the analysis showed that there were 5,018 households, or 14,021 residents, still without internet access in the state’s fastest-growing county.

County officials offered the perspective that the 14,021 residents without broadband would equal the 58th largest county in the state by population and the 5,397 residents without service in District 4 would be more than the combined population of Sharkey and Issaquena counties.

Providers counted in the analysis were AT&T, C Spire, Xfinity, and Northcentral Connect.

Supervisors have been anxious to see progress on the broadband service issue.

“We’ve been working to bring the internet to our citizens for over 10 years,” said Supervisor Lee Caldwell. “The county cannot be in the internet business and we don’t have control of where it goes but we can bring the providers together. That’s what we’ve done and we’ve done their legwork by mapping areas of need and showing them where future subdivisions are going and areas of need that we have now. We’re encouraging them to come to those areas.”

“I think in the next 30 days we’re going to have our first initial step plans looked at with cost estimates,” Presley said. “The great thing is this is coinciding with unprecedented amounts of federal funds that are flowing to the county and to the state to be used for this purpose.”

For instance, in December of last year, it was announced the state would be receiving $495.7 million in federal funds from the Rural Development Opportunity Fund. Since 2016, Mississippi has been awarded in federal grants to internet service providers under the Connect America Program and the state already has $75 million in federal CARES Act money extending broadband to unserved or underserved areas this year.

“There are monies that are now coming down that are going to bring money to partner with the providers with funding to encourage them to go the last mile,” Caldwell said. “We’re looking at the federal funds that are coming in to get better service and also for future needs for subdivisions that are coming in.” There’s not going to be stone left uncovered. It’s going to take different ways to get internet service to the area.”

Presley again referred to the response people had to the pandemic that speaks to the need.

“Parents have gone through a nightmare in the past two years of children doing homework from home and if they didn’t have an internet connection they had to drive them to McDonalds to get an internet connection,” Presley said. “That’s unacceptable to me in the year 2021. We’ve got to get those problems fixed just to guard against any other future pandemic and for the future economic growth of our people in our state.”

Following are the results of the DeSoto County Broadband Analysis done this summer.