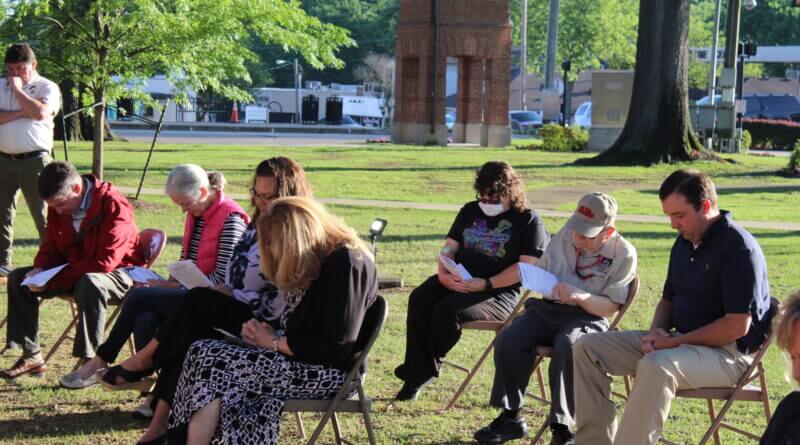 Thursday is the National Day of Prayer and DeSoto County is observing the day with prayers being lifted for the community, county, state and nation.

The theme for the day this year is based on the verse from 2 Corinthians 3:17, “Now the Lord is the Spirit, and where the Spirit of the Lord is, there is liberty.”

The day in DeSoto County was opened early Thursday morning with DeSoto County supervisors and Hernando Mayor Tom Ferguson coming together on the steps of the County Courthouse.

Ferguson provided the welcome and pointed out the legal support for the observance. He remarked that the group Freedom From Religion Foundation in 2011 had challenged the National Day of Prayer concept but a U.S. Appeals Court had thrown out the challenge as not having legal standing. The ruling allowed then-President Barack Obama to issue a National Day of Prayer proclamation.

At the courthouse program, supervisors took turns praying for the Seven Centers of Influence in our Nation.

Supervisor Jessie Medlin concluded the program by leading those who came in the Lord’s Prayer.

Supervisors and Mayor Ferguson also joined together to sing “We Are One in the Spirit” and “Amazing Grace.”

Olive Branch city officials joined local clergy and faith followers in a noon hour moment of prayer in the gazebo in front of City Hall.

Following the guidelines of the National Day of Prayer organizers, prayers were said for the same areas.

In addition, Alderwoman Pat Hamilton read a proclamation of the day from Mayor Scott Phillips.

Olive Branch Police Chief Don Gammage led the group in the Pledge of Alliegiance, First Baptist Church of Olive Branch Pastor Jerrod Brooks provided the welcome, and Bill Britton closed the observance by leading the group in singing the Doxology.

Photo: Prayers were said for the country and community during Thursday’s National Day of Prayer program in front of the DeSoto County Courthouse in Hernando. (Bob Bakken/DeSoto County News)