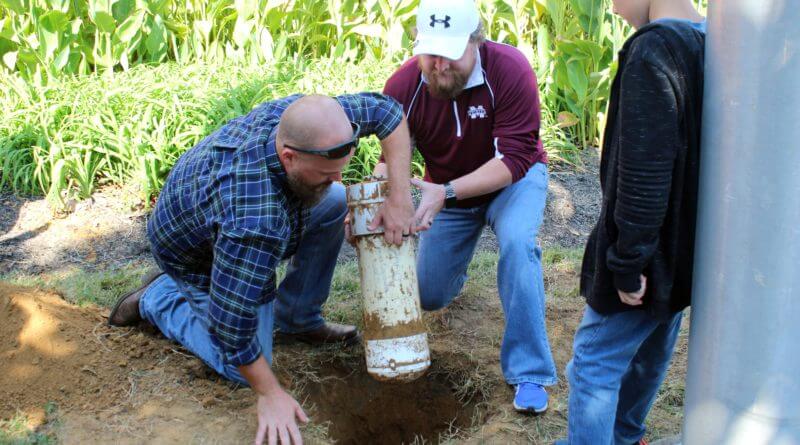 In the year 1999, the entire eighth-grade class of Horn Lake MIddle School was tasked with a project that would take 20 years to complete.

The world was facing the uncertainty of what would happen with a calendar year change to 2000 and the start of a new millennium. People were storing food and water and making ready Y2K shelters in case there were major shutdowns connected with computer programming at the time that failed to factor the switchover to a new century.

With the uncertain global atmosphere surrounding what might happen, the eighth-grade assignment was to find items reflecting the times. A time capsule would then contain these items, a capsule that was buried into the ground next to the City Hall flagpole.

Twenty years later, on Saturday, Oct. 3, some of those eighth-graders, now 20 years older, came back to City Hall to unearth the time capsule and see what they had put inside.

The digging had been planned for a couple of weeks prior to Saturday. Without knowing the location, it would become a nearly futile job of digging around the pole and not knowing where to dig.

That problem was solved as a metal detector was found and brought out to search for the capsule. However, even that did not help. Eventually some old photos had of the capsule’s burying helped locate its position.

After some digging to and around the capsule, it was finally pulled out and opened.

Inside were several clippings of news articles from the time, including an article on the “new” Horn Lake City Hall and a local cartoon on the battle between Horn Lake and neighboring Southaven to be the site of a shopping center.

“It makes me feel old,” said Clyde Bostick as he viewed the articles removed from inside the time capsule. “I do remember Y2K being a big deal that year.”

Moisture did take its toll on the items and the aging showed. Most of the photo prints were damaged to the point they were not recognizable, but fortunately the news articles could be viewed as they had been laminated ahead of time.

There was also a VHS tape cartridge, but its condition was damaged by the moisture as well.

However, those who came out got to take a glimpse back in time, thanks to a 20-year old assignment of some Horn Lake Middle School students, an assignment completed on a Saturday morning in the year 2020 at City Hall.