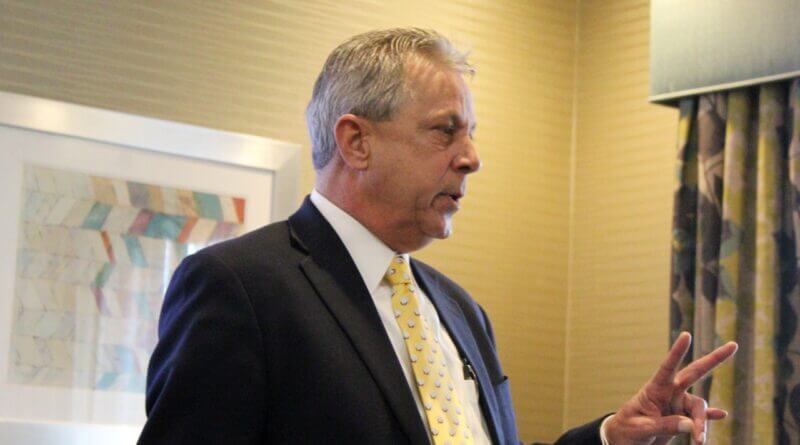 Hernando Mayor Tom Ferguson thinks the DeSoto County seat has progressed in many ways the past few years and expects more growth in the future.

Ferguson was the speaker at Wednesday morning’s Grits and Government breakfast gathering hosted by the Hernando Main Street Chamber of Chamber of Commerce at the Hampton Inn Hernando.

The mayor admitted it’s been a tough year for the city’s business community working its way through the COVID-19 pandemic but there has been growth through the trying times.

Ferguson’s presentation added that several businesses have also expanded in the past year.

One of the current construction projects underway on the north end of Hernando along U.S. Highway 51 is the Associated Warehouse Grocers, or AWG, distribution center. The massive facility, when finished, will merge operations at its current warehouse on Stateline Road in Southaven and another one in Memphis. It is expected to be fully operational in 2023.

Ferguson pointed out Wednesday morning that the $300 million expansion of AWG’s operations is more than just a warehouse for the city.

“This will add a lot of personal property, computers, machinery, on the inside that will have additional tax dollars to the city, county, and schools,” Ferguson said.

Ferguson reminded those attending the breakfast session that progress made on the commercial and industrial side is helping keep property taxes down for those who live in Hernando.

Johnson led the city as mayor for 12 years before Ferguson unseated him four years ago. He is currently Vice President of Client Relations for Correctional Counseling Inc., based in Germantown, Tennessee.

The primary could determine the next mayor, as there have been no Democrats filing for the office, as of Wednesday morning.  Feb. 5 is the final day to file for the municipal primary.