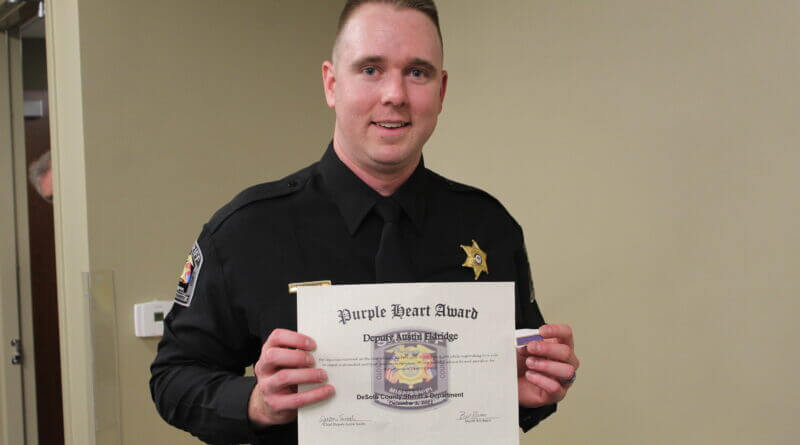 In recent years, the DeSoto County Sheriff’s Department has issued its highest award to one of its deputies just three times.

K9 Dep. Lee Hutchens and Sgt. Hunter Garrett were given the department’s Purple Heart Award after being shot in 2017 during a concerted effort to catch armed robber Kevin Darnell Washington in Southaven. Hutchens and Garrett were wounded by Washington during a shootout in the Stateline Road Kroger parking lot.

Search and Rescue Unit Director William Nichols received the award posthumously after he drowned trying to save his son from a Florida rip current while on vacation in 2020.

Late last week, Dep. Austin Eldridge became the latest deputy to receive the department’s Purple Heart Award. Following the department’s awards ceremony, Eldridge explained in an exclusive interview with DeSoto County News the award is given to a deputy who was either killed or seriously injured performing in the line of duty helping someone.

“I was very honored,” Eldridge said. “It is a big honor to get something like this. It’s very humbling.”

Eldridge was seriously hurt earlier this year when he was struck trying to help a disabled vehicle change a tire along I-269. A Memphis woman was charged with driving under the influence when the vehicle struck Eldridge. A leg had to be amputated above the knee and the other leg was severely injured by the collision, among his injuries.

He spent several weeks in the hospital before returning home to continue physical therapy. Eldridge is now back at work and has gone from a wheelchair to walking with a cane.

“My legs are getting stronger, just gotta work on the back a little more and I should be able to walk before too long without this cane,” Eldridge said. “I’m holding down a desk job now, helping out with warrants or criminal investigation cases, whatever they need me to do right now in an office setting,” adding his goal is still at some point get back on patrol..