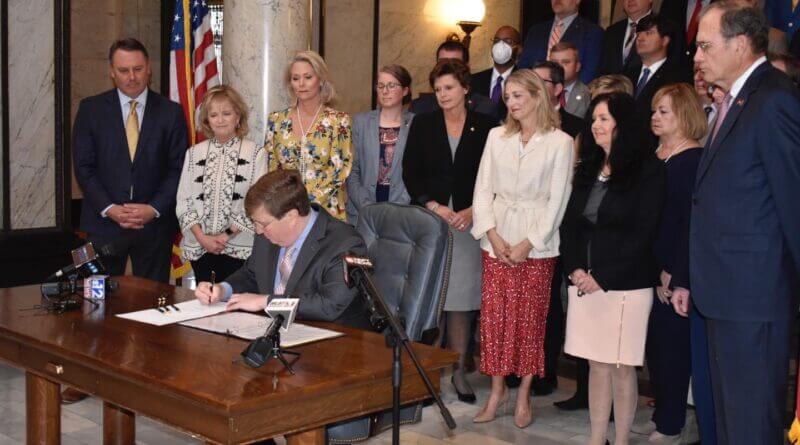 The measure that means Mississippi has become the first state in the nation to enact a law that bans transgender athletes from competing in girls’ or women’s sports teams is now law. Gov. Tate Reeves signed Senate Bill 2536 during a ceremony Thursday at the State Capitol in Jackson.

DeSoto County legislators all supported the measure that requires a public school or a college that is currently a member of the NCAA, NAIA, or NJCAA in Mississippi to designate its athletic teams according to biological sex. The law provides protection for any school or institution of higher education that maintains separate athletic teams or sports for students of the female sex.

The bill passed the House by an 81-28 vote. All of DeSoto County’s representatives in the House voted in favor of the bill: Republicans Dana Criswell, Dan Eubanks, Jeff Hale, Steve Hopkins, Bill Kinkade, and Democrat Hester Jackson-McCray.

In the Senate, the bill passed by a 34-9 vote with DeSoto County Republican Senators Kevin Blackwell, David Parker, and Michael McLendon all supporting it.

Mississippi becomes the first state to enact such a measure this year. It comes after President Joe Biden signed an executive order in January that bans discrimination based on gender identity in school sports and elsewhere. The new Mississippi law goes into effect on July 1.  It was authored by Sen. Angela Hill (R-Picayune).

Mississippi is one of more than 20 states that has or is considering restrictions on athletics or gender-confirming health care for transgender minors. Idaho passed a similar measure last year but it was blocked by a federal court.

On social media to announce the signing of the Mississippi Fairness Act, Reeves said, “We will protect our young girls and ensure them a fair shot in public school sports—they should not be forced to compete against biological males.”

The bill also bars biological men from competing in women’s sports in Mississippi. Reeves said the participation of transgender athletes “presents an unfair challenge to biological girls who wish to join sports teams.”

The new law is expected to be challenged in court, similar to what happened in Idaho last year.