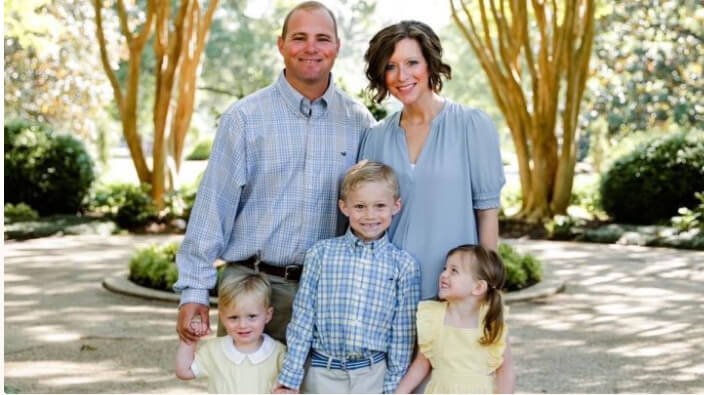 A family grieving over the loss of their little daughter is feeling the love, comfort and support of their community and beyond in the midst of their tragic loss.

This past weekend, little three-year-old Janie Branch, daughter of Bruce and Abigail Branch of Holly Springs, died of injuries suffered in a two-vehicle accident in Grenada County.

Knowing that the Branch family is facing more than a personal loss, but a financial hardship as well, Sarah Taylor, a friend of the family and whose husband Jason is school principal and assists Branch on the baseball field, started to raise funds to help defray significant costs the Branchs now face.

Sarah Taylor, a teacher at Blue Mountain School in the South Tippah School District, said a GoFundMe account was set up to help pay for the expensive medical bills they knew the Branch family would be facing, even before they knew Janie would pass away from her injuries.

Taylor explained they were aware that simply airlifting Janie to Le Bonheur Children’s Hospital in Memphis, where she was taken, was going to be a costly, but necessary, trip.

“Our little boy had to be airlifted once and we didn’t realize that insurance doesn’t pay for that,” Taylor said. “We got home eventually and got the first bill for $17,000 just for the Life Flight, and that’s just from Holly Springs to Le Bonheur. We knew we had to do something so that whatever happens with Janie, this is not something they had to worry about.”

Taylor said within 24 hours of the GoFundMe account being opened, it had already reached $25,000.

“That’s how beloved the family is,” Taylor said. “Everybody loves Bruce Branch in the coaching community and Abby is beloved wherever she works. The children are just a huge part of the community. I’m really not surprised it’s gotten as much as it has gotten.”

Those in the community and around the area have rallied together to support the Branch family at this time.

“A lot of schools have come and placed flowers on the pitching mound,” Taylor said. “The Center Hill baseball team came and some other schools have. The baseball field was Janie’s favorite place to be.”

Taylor said another account has been set up at the Bank of Holly Springs to cover funeral expenses for Janie, whose services are set for Friday, Sept. 10, at First Baptist Church in Holly Springs, starting at 11 a.m. Visitation is Thursday, Sept. 9 from 5-8 p.m. at the Holly Springs Funeral Home. Burial will be at the Sidon Cemetery in Sidon.

One thought on “Community support in a tragic time”